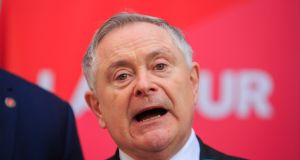 The Labour Party has said it is “absolutely certain” that extending a temporary rent freeze for three years would not be unconstitutional.

Fianna Fáil TDs have said they will not implement a rent freeze if they enter Government on the basis of legal advice the party received.

Labour has proposed a three year rent freeze as well as rent caps as part of a policy launch on measures to help renters on Wednesday morning.

“I spoke to our legal advisor and it would be unconstitutional if it was indefinite and if it was over a long period of time,” the party’s housing spokeswoman Jan O’Sullivan said.

“You can only put rent up once a year and basically we would be extending that to three years. We are absolutely certain this there is not a legal problem doing this. And we are also absolutely certain that it needs to be done. Fianna Fáil are rowing back more for ideological reasons.”

Another of the key planks of the Labour rental policy is for a rent to buy scheme.

This will mean that a person with a tenancy for three years that successfully pays all their rent would see it turned into a deposit for the property that they will then go on to own.

The party has also said it will introduce rent caps and regulate short term letting.

Kevin Humphreys, the party’s candidate in Dublin Bay South, said that “the Government says that supply is the issue, but we are leaking supply into the short term rental market.”

The party pointed out that Ireland has had the highest rent increases in the European Union since 2015 and since February 2016 rents have risen by 25 per cent. The average rent nationwide is over €1400 and up to €2,200 in parts of Dublin.

The party also says it will ban the practice of landlords asking for more than one month’s rent as a deposit.

Ciaran Ahern, the Labour candidate in Dublin South West, said that in his constituency rents have risen since the last general election by up to 40 per cent for one or two bed houses or apartments.

“At the same time, wages might have risen by up maybe ten per cent and it is just not keeping pace. Leo Varadkar has told us we should all just move home and live with our parents to solve our problems, well, I’m sorry Leo, not all of us have the luxury of doing that and it is just not good enough,” he said.

“My generation can not understand why Fine Gael and Fianna Fáil are refusing to look at rents controls.

“Maybe they just want to protect the old vested interests like they always have done. It is not rocket science, it is just a change of approach.”