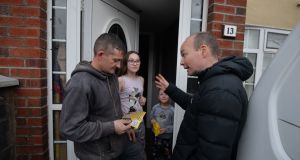 Everyone is jumping on the old age pension bandwagon now.

It has become a major issue in the general election. Bríd Smith of People Before Profit thinks it’s going to be huge. “It will electrify the year of 2020.”

She could have said “I told you so” at the party’s manifesto launch in Dublin on Wednesday, but her colleague Richard Boyd Barrett had that angle well covered. Richard and his fellow socialists were dead set against raising the pension eligibility age when it was neither popular nor people-before-profitable.

They never wanted this “scandalous move” to happen in the first place. “We would like to emphasise that we are not johnny-come-latelys on that policy,” he sniffed, sounding ever-so-slightly piqued. “Everybody now seems to be talking about it.”

Perhaps he should take it as a compliment, but he knows the main political parties have only come on board because they live in mortal dread of upsetting the cherished nanas and granddads of Ireland. The plan to raise the pension age in stages up to 68 has been in the pipeline for years, largely ignored because the people it will effect were not yet old enough to start getting properly angry.

But the first wave is fully advancing now and going over the top with gusto every day on Joe Duffy’s Liveline. Not good for the outgoing team in the middle of a tight election campaign. The power of Joe with a fearsome cast of incandescent pensioners queuing up to give out yards about the Government over the national airwaves has terrified Fine Gael. The other parties are also scrambling to protect their flanks as the expectant pensioners gather in strength.

People Before Profit is keen to remind mature workers on the cusp that Fianna Fáil and the Greens, and then Fine Gael and Labour, were all complicit in the plan to hike the age level.

But can this campaign get any sweeter for angelic Sinn Féin – happily not among the ranks of the implicated? Well, the normally standoffish Boyd Barrett and chums came a-wooing on Wednesday, with even Paul Murphy going down on metaphorical bended knee (despite being a member of Rise) to seek Mary Lou’s hand in what he romantically termed “radically breaking the cycle”.

It remains to be seen where that goes. Post-election promiscuity is almost guaranteed from all sides once the votes are counted. This makes Boyd Barrett (very keen on political abstinence) sad. “We are not going to trade away our principles and policies just to get a ministerial seat” like other political tarts.

But back to the pensioners, who may yet take to the streets to scare whatever is left of the living daylights out of Leo’s administration.

Bríd Smith (Dublin South-Central) wants people to “really pile on the pressure”. She starts the ball rolling on Saturday morning in her constituency with a protest in Cork Street and urges all People Before Profit candidates (27 in all) “and beyond” to do the same. “Call the grey vote together, get to your local social welfare office and demand they end this measure now.”

The establishment, said Bríd, “always feel the pressure of the grey vote, in which I now include myself”.

It’s a scandal, cried the permanently scandalised Boyd Barrett. Thousands of euro “will be robbed out of the pockets” of pensioners who worked hard all their lives by a heartless Government.

As for the four political parties in the frame, “they have, between them, loaded the gun and pulled the trigger on the pension age and therefore committed a vast robbery of pensioners’ meagre finances,” added his proudly grey comrade Bríd.

She can’t get over the U-turn. After standing by the age change, “now they’re all crying: ‘Oh, we wouldn’t do that. We wouldn’t.’”

From being on the right side of the argument to seeing himself as an amazing political influencer, RBB decided to claim the credit for the different results in the two national opinion polls last week. The first, on Sunday, gave Fianna Fáil a huge 12-point lead over Fine Gael. The second, published by The Irish Times on Tuesday, saw that gap shorn back to a bare two points.

At its campaign launch last week, People Before Profit argued that “the cycle of Fianna Fáil domination can be broken”. And lo and behold, didn’t that domination highlighted on Sunday shrink dramatically when the second set of figures came out.

With such power over the electorate and a bigger three-week window, he should have considered running more candidates, along with an overall majority. Or then again, maybe the stunning result was not so much to do with Richard’s rhetorical powers of persuasion and more to do with the not-unusual case of two different polling companies, using different methods, producing different results.

The Irish Times’ results indicated less than half of the electorate want to vote for the two big parties. Great news for People Before Profit.

“We could be facing a historic moment,” carolled Boyd Barrett, daring to dream. “An earthquake where we finally break from the shackles of Fianna Fáil and Fine Gael politics and set off towards a different future.”

Gino Kenny (Dublin Mid-West) was also hopeful on the seismic activity front. “A bit of an earthquake for the establishment parties.”

He’s getting very definite tremors from the doorsteps. People want a change. “I think this will be actually a good election for the left.” The result might even turn out to be a “big surprise” for “the progressive left”.

Mary Lou might be flattered, but her party appears only to have eyes for Fianna Fáil at the moment

The thing is, though, in order to make an impression they need the weight of numbers from left-orientated Independents and parties. Paul Murphy (Dublin South-West) put it up to Sinn Féin.

People don’t only want change. A substantial minority want “radical change”. That figure could Rise to a majority given the right conditions.

“If Mary Lou McDonald came out and said clearly” she will not be voting for Leo Varadkar or Michéal Martin and that Sinn Féin will not prop up their parties in government, “there is a chance here for us to radically break the cycle.”

Mary Lou might be flattered, but her party appears only to have eyes for Fianna Fáil at the moment.

They should present a more united front, suggested Richard, particularly when the parties and Independents from the left have voted together many times in the Dáil on issues such as health, housing and the tax system. “We have often campaigned together and often very, very effectively.”

So who might make up this grand, alternative coalition?

“Look, I’ll let them categorise themselves.”

That’s the end of that, so.