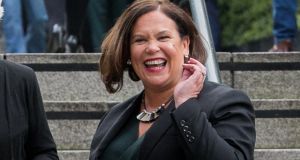 Sinn Féin’s Mary Lou McDonald: “Gerry is the expert on Gerry Adams, more than you and I.” Photograph: Gareth Chaney/Collins

Waterford’s WLR FM was whipping up a frenzy of anticipation among listeners all Wednesday morning with a teaser that Fianna Fáil’s Mary Butler was poised to make a “massive statement” live on air.

It transpired to be Butler’s “belief” that “outside influences” were determining how her constituency competitor David Cullinane’s party Sinn Féin “do their business”.

“I would imagine the [IRA] army council in Belfast still has a significant role in how Sinn Féin do business in national politics,” she explained.

Pressed as to how she knew this by broadcaster Damien Tiernan, mysterious Mary wasn’t giving much away.

“It’s not from intelligence,” she relented. “It is stuff I have just picked up ... that would be a personal belief I have ... I have read different things.”

Why does Gerry Adams look like he's about to tell us about the amazing benefits of his own brand manuka honey? pic.twitter.com/mMJqe7tr4g

The question hasn’t gone away, you know. Mary Lou McDonald was asked again whether she believed her ex-leader Gerry Adams’s denial that he was ever a member of the IRA.

“That is Gerry’s position and I accept that position,” she said during her grilling by Sean O’Rourke on RTE Radio One. “Gerry is the expert on Gerry Adams, more than you and I,” she added.

But with pictures doing the rounds of the retiring Louth TD’s ever-lengthening hair – apparently because of a bet on the election date with Martin Ferris – fresh questions are starting to emerge about Adams’s affiliations. You can just hear O’Rourke haranguing him: “Are you now or have you ever been a member of the Bee Gees?”

By that measure, Fine Gael might find some comfort after a slip in the opinion polls by an analysis of social media conversation since the election campaign started.

Olytico, a home-grown company specialising in online monitoring, looked at 69,814 tweets, from 14,434 Twitter accounts, with a potential audience of more than 13 million, between January 14th and January 20th.

The nuances of fiscal prudence weren’t overly bothering one voter in Co Tipperary, as the controversy over pushing the State pension age out to 67 gathers momentum. Asked about his views on the campaign’s hot topic, the Nenagh man told RTÉ roving reporter Cian McCormack: “We’ve worked all our lives. I think the pension age should be left the way it is – at 65.”

Any suggestions on how that might be paid for out of the public purse?

“It’s up to the government to sort that out,” the voter hit back. “We were the ones who kept the country going when we were in the doldrums. So it’s really up to them to sort it out for us.”

The Green Party’s Saoirse McHugh doesn’t mince her words. In an interview with Joe.ie, she longed for revolution, a general strike and the abolition of the State to be replaced with devolved communities.

Nothing you’d be expecting from a Fine Gael or Fianna Fáil-led government any time soon. “I wouldn’t prop them up,” she said, lest there be any doubt. “It would make me sick.”

Going into power with either party would be a “disaster” for the Greens, and would allow them be used as a “green fig leaf” for the likes of carbon taxes and other unpopular climate action measures, the would-be Mayo TD railed.

The Dáil hopeful, who has won herself a big following with outspoken enthusiasm and ideology, particularly among younger voters not necessarily living in her constituency, also called for a “proper shadow cabinet” made up of Greens, Sinn Féin, Labour and other left-leaning parties.

The number of years former TD Maria Bailey served as an elected representative for Fine Gael in Dún Laoghaire, before announcing on Wednesday that she would not seek re-election as an Independent. Bailey was deselected by the party over the so-called SwingGate controversy.

Extraordinary. For the first time in 87 years, Labour will not have a candidate on the ballot paper ... Sad, too, given the great service given by the Springs and Moynihans