Legislation to let people who are terminally ill decide the timing of their own death will not create “a slippery slope” and increase suicide numbers, campaigners say. Video: Enda O'Dowd 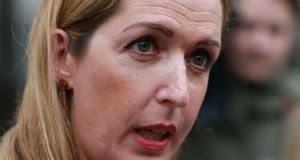 Vicky Phelan is supporting a Bill to allow terminally ill patients decide the timing of their own death. Photograph: Nick Bradshaw

Legislation to let people who are terminally ill decide the timing of their own death will not create “a slippery slope” and increase suicide numbers, cervical cancer campaigner Vicky Phelan has argued.

The Cabinet will decide today its position on the Bill put forward by People Before Profit’s Gino Kenny, a TD for Dublin Mid-West.

Similar legislation has come before the Houses of the Oireachtas, without success. Labour Party leader Alan Kelly says he supports the Bill. Sinn Féin may also support it.

Urging parties and politicians across the Oireachtas to support the Mr Kenny’s proposal , Ms Phelan said it would allow people such as her to die peacefully and with dignity.

Saying it would not be available to be used by those with depression or other non-terminal illnesses, Ms Phelan said Mr Kenny’s legislation was “very rigid” in its construction.

During her own experience of depression she would have taken advantage of such legislation, if that had been allowed. “That would have been the wrong decision, because I’m fine now,” she said.

Instead, the Bill is about giving those in pain at the end of their lives the choice to die “gently” without “unnecessary suffering”, she says. “We don’t do it to animals. I don’t see why we should do it to ourselves.”

Speaking outside Leinster House, Mr Kenny said the Bill would give the legal and medical right to authorise voluntary assisted dying for people suffering from a terminal illness.

Prominent Right-to-Die campaigner Tom Curran said that there were many freedoms in Ireland but it did not extend to the end of life.

Mr Curran spoke about his wife, Marie Fleming, who before her death campaigned for the right to choose the moment of her passing.

His wife had thought about going to the Dignitas clinic in Switzerland for an assisted suicide, but stayed at home when she agreed a plan with her husband to “end her life whenever she liked”.

“We had an extra five years of life, from the time that she decided not to go to Dignitas because she was now in control herself. That’s all we are asking for, is giving people that control,” he said.

Assisted suicide rules elsewhere have not led to a flood of cases, said Gail O’Rourke, who found herself on the wrong side of the law when assisting her friend Bernadette, who also suffered from MS.

“They could be investigated by the HSE [or by] the Garda, just to make sure that that person is making the decision for themselves, under no duress, which is what people fear,” she said.

1 ‘Insane’ gathering of hundreds of students in Galway condemned
2 Prepare for six to nine months of Covid-19 restraints, warn health officials
3 Irish, German and Italian contact-tracing apps to be linked in bid for ‘safer’ travel
4 Man unidentified in psychiatric hospital for 30 years may have DNA taken
5 US election: Everything you need to know about Tuesday’s presidential debate
Real news has value SUBSCRIBE