Ceann Comhairle Seán Ó Fearghaíl adjourns the Dáil after saying all members of the Cabinet are restricting their movements. Video: Oireachtas 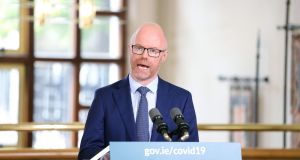 Minister for Health Stephen Donnelly speaking in Dublin at the unveiling of the Government’s blueprint for living with Covid-19. Photograph: Julien Behal/PA Wire

Stephen Donnelly does not have coronavirus, according to the results of a test for Covid-19 the Minister for Health took on Tuesday.

His Cabinet colleagues are no longer required to restrict their movements, a Government spokeswoman confirmed on Tuesday night.

It emerged earlier that all members of the Cabinet were restricting their movements after Mr Donnelly said he felt unwell in the afternoon.

A spokeswoman said the Minister had contacted his GP and was referred for a Covid-19 test. The result was made public after 9pm.

Minister of State for Health Frank Feighan confirmed in the Dáil that “Minister Donnelly doesn’t have Covid-19 and I wish him well”.

It had also been confirmed by the Department of Health that Dr Ronan Glynn, the acting chief medical officer, was restricting his movements because he met Ministers on Monday for a briefing on the latest coronavirus developments.

Mr Donnelly had attended the full meeting of the Cabinet on Tuesday morning and had also appeared at and addressed the press conference at which the Government outlined its new Covid-19 plan.

All other members of the Cabinet, including Taoiseach Micheál Martin and Tánaiste Leo Varadkar, had been told to restrict their movements as a result and as a precautionary measure.

However, the move was news to at least some Cabinet members. The Minister for Justice Helen McEntee was told while being interviewed on RTÉ radio, while another Cabinet Minister said that the development was “news to me”.

Minister for Transport Eamon Ryan was already self-isolating at home after a member of his household began to feel unwell.

Minister of State for European Affairs Thomas Byrne has also been self-isolating since Monday, as he awaits the result of a Covid-19 test after he woke up with a “very mild cough”, he said.

After 5pm, the Ceann Comhairle Seán Ó Fearghaíl told the Dáil he had received some “very serious information”.

Mr Ó Fearghaíl said: “I’ve been told that arising out of events today the Cabinet must self-isolate.

“Therefore the possibility of proceeding with business does not arise and the House stands adjourned, I suspect until Tuesday next or until I’m directed by the Taoiseach to reconvene the House.”

However, it was later announced that the Dáil would sit again on Tuesday night, without any senior Ministers being present and Ministers of State taking questions from the Opposition.

But Minister for Agriculture Charlie McConalogue took his first question time since his appointment to the role. He was the first Cabinet member to attend the House after it was confirmed Mr Donnelly had tested negative.

The Taoiseach said a communication had now been sent to all Ministers to restrict their movements. He said he had been in touch with the Ceann Comhairle’s office to say he believed Minsters of State could represent the Government in certain issues and that the Dáil could reconvene.

“We had to be cautious,” he said on RTÉ Six One News. “There were quite a number of meetings yesterday that Stephen Donnelly attended in respect of this plan to deal with Covid-19, both the Covid-19 Cabinet committee itself that went on for quite a number of hours and then last evening he briefed the entire Cabinet.” Mr Martin said in the meantime he could resume his activities on a restricted basis, using Zoom meetings and over the phone. “I will be at my desk at work, yeah,” he said.

Sinn Féin leader Mary Lou McDonald wished Mr Donnelly well but said there was a “marked contrast between this reaction where the entire Cabinet has to self-isolate or limit their movements, as against scenarios where workers have tested positive in meat plants for example. There has to be a consistency in terms of how we respond.”

“I think it is a really bad turn of events that the business of Government now is suspended.

“We have to avoid, if at all possible, completely closing down Government business.”

Earlier, Mr Kelly claimed there was an “inherent contradiction” in the Government’s new, five-level coronavirus plan launched on Tuesday, which he described as “Orwellian”.

The plan involves a scale of restrictions from Level 1 to Level 5, with Level 5 being the most severe.

The entire country is on Level 2, although Dublin has a number of extra conditions because of a high number of coronavirus cases in the capital.

Speaking in the Dáil, Mr Kelly said there was now a situation “where we have Dublin at two and a bit, that they’re sort of getting a yellow card”.

“If they behave themselves in a short space of time,” they may get back to the same level as everyone else, he added.

But during testy exchanges, Mr Martin insisted the new roadmap was clear. The plan imposes additional restrictions in Dublin on home visits, indoor gatherings and care home visits, while so-called “wet pubs”, which do not serve food, will remain closed in the capital.

“There’s no such thing as 2.5. It simply does not exist,” Mr Martin said, adding that the only deviation from the advice of the National Public Health Emergency Team (NPHET) was on “wet” pubs and allowing 5,000 spectators at outdoor events.

He said the Government did not get advice from NPHET to move Dublin to Level Three. Ministers accepted its advice “in respect of Dublin today” and NPHET would meet again on Thursday and “could give other advices”.

During Leaders’ Questions following the launch of the roadmap, Ms McDonald accused the Taoiseach and his Government of “failing in your responsibilities” because, she said, a proper Covid-19 testing and tracing system was not in place months after it had been promised.

She accused Mr Martin of “making it up as you go along” and said that months after the Government pledged to do 100,000 tests a week this was still not in place, and it was “central” to dealing with Covid-19.

Ms McDonald said the plan was not worth the paper it was written on so long as full testing and tracing was not in place. She said that “of 59 pages, one of them addresses testing and tracing”, arguing it was the “most central part”.

She said “either you get testing and tracing right and you do it quickly or we will be consigned to a yo-yo effect of further restrictions and even lockdowns”.

When Opposition TDs intervened as he was speaking Mr Martin told the Sinn Féin benches to “stop interrupting” and he accused Ms McDonald of being partisan.

Social Democrats leader Róisín Shortall said anyone seeking clarity about the five levels of risk in the roadmap would be “bitterly disappointed” as she accused the Government of effectively ignoring international travel and putting it on the long finger until the middle of October.

She also asked what the specific criteria were for counties moving from one level to another. Ms Shortall said that, on the first day of the announcement, the Government “starts talking about a two and a bit level”.

The Taoiseach said he agreed “ 100 per cent” about the centrality of testing tracing and insisted that was in the plan.

He said: “It’s not good enough to attack people as being woeful and trying to belittle the very strong measures that have been taken” on including the serial testing in nursing homes and meat plants.

Mr Kelly called on the Government to clarify whether Dublin was at Level Two or Level Three of the six-month plan, and he said it was a “glaring omission” that the document was not “elderly proofed” or proofed to avoid discriminating against people with disabilities or those who were vulnerable.

He and Ms Shortall called on the Taoiseach to clarify where the Government deviated from NPHET on its advice and Mr Martin said the only difference was in relation to wet pubs and the attendance at outdoor events including sports stadiums.