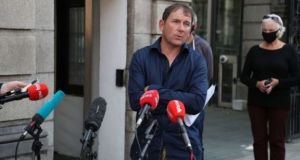 People Before Profit TD Gino Kenny has welcomed the majority Dáil vote to allow his Dying with Dignity Bill progress for examination by the Oireachtas Justice Committee.

Mr Kenny said it was a “significant” step forward that a majority of TDs backed the legislation by 81 to 71 after a free vote for all TDs.

The Cabinet split on the legislation when the vote took place on Wednesday. Just four Fianna Fáil TDs supported it and two thirds of Fine Gael TDs also voted against it. The Green party backed the Bill.

The Government expected a tight vote because TDs were allowed to vote with their conscience but Mr Kenny said it was still a surprise that the vote went his way.

The legislation provides for people with progressive terminal illness to decide the timing of their own death and avail of assistance to end their lives under controlled and monitored circumstances.

Mr Kenny said the Dáil vote did not mean the legislation would pass but it was a significant step forward that it would go for pre-legislative scrutiny by the Justice Committee.

This will include examination of the provisions of the Bill and its implications. Expert witnesses on both sides of the debate will also be called in as part of the scrutiny in a process that usually takes up to six months.

A report on the process is then drawn up after which a vote is taken by the committee on whether the legislation moves to the formal committee stage for debate and decision on amendments.

Last night the Dáil initially voted on a Government amendment or counter motion which would defer the legislation for 12 months to allow a special Oireachtas committee to be established to take an in-depth look at the Bill.

It would be similar to the committee established to deal with the Eighth Amendment on abortion and would consider the legal, medical, ethical, moral and constitutional issues.

In that vote the three Government parties allowed all TDs except Cabinet Ministers a free vote.

Sinn Féin, the Labour Party and the Social Democrats rejected any delay on the Bill.

When the Government proposal was rejected the Coalition parties allowed all TDs including Cabinet members a free vote for a second vote on whether to allow the Bill progress.

Fine Gael divided 10 in favour of the Bill going forward with 21 against. All 12 Green TDs backed Mr Kenny’s Bill as did Sinn Féin, Labour, the Social Democrats and Solidarity People Before Profit.

Independents Joan Collins and Michael McNamara were the only Independents in attendance who supported the legislation.

A number of Independent TDs opposed both the Government amendment and the progression of the Bill to legislative scrutiny.