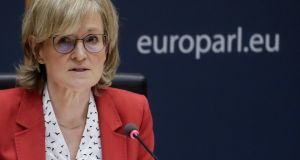 The MEPs approved the appointment of the long time Fine Gael representative with a decisive vote of 583 in favour and 75 against on Wednesday. Photograph: Stephanie Lecocq/ EPA

Mairead McGuinness has been approved by the European Parliament to be Ireland’s commissioner, taking up the brief of financial services.

In a vote on Wednesday, MEPs approved the appointment of the long time Fine Gael representative with a decisive vote of 583 in favour and 75 against.

Valdis Dombrovskis, the Latvian commissioner who will assume the trade portfolio vacated due to the resignation of Phil Hogan, was also approved by 515 in favour to 110 against.

The appointments are expected to get the final nod of approval by the national leaders of the EU in the European Council in the coming week.

“I expect to hit ground running early next week,” Ms McGuinness said in a statement. “I will be focusing on a wide range of issues and ensuring financial stability in these difficult times, with the Covid-19 pandemic.”

MEPs wearing face masks applauded and rose to their feet in the European Parliament chamber after the result of the vote was announced.

European Commission president Ursula von der Leyen, who asked for a woman to be nominated for the role as well as a man in order to increase gender balance in her executive, congratulated Ms McGuinness in a tweet.

“Well done... for convincing the European Parliament to support you for the post of Commissioner!” Dr von der Leyen wrote. “I know you will do a great job on EU financial services, in the frontline of our recovery efforts. Your experience will be very valuable.”

Ms McGuinness enjoys broad support in the European Parliament after having served as its vice president since 2014.

Her seat in parliament for the Midlands-North West constituency is set to be taken up by Fine Gael councillor Colm Markey.

Fine Gael MEPs welcomed Mr Markey after the vote, which they described in a statement as a “strong endorsement” of Ms McGuinness.

“The financial services portfolio she now takes on is highly significant, both for Ireland and the EU. It covers banking union, capital markets union, sustainable finance, and a new digital finance strategy,” the Fine Gael MEP for Ireland South Seán Kelly said.

Ms McGuinness has said her priority will be to reform the financial system to create a more inclusive society, prioritising lending to small and medium enterprises.

“European Commission president Ursula von der Leyen has tasked me with advancing the banking union, the capital markets union and sustainable finance. This portfolio reaches out to all policy areas in the European Commission, as we strive for a more sustainable economy and society, and meet the challenge of climate change and biodiversity loss,” she said in a statement.

“Tackling money laundering will also be a core part of the work programme I will be dealing with, as well as regulating the new cryptocurrencies and ensuring consumer protection.”

Ms McGuinness was nominated for the role following the resignation of Mr Hogan in the wake of the Golfgate scandal.