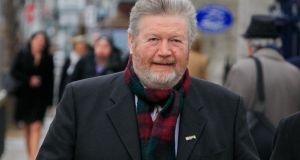 Senator James Reilly said he would be focusing his efforts on regaining a Dáil seat. File photograph: Gareth Chaney Collins

Senator James Reilly has announced he is not seeking a Fine Gael nomination in Dublin for the European elections in May.

His withdrawal has left a clear path to the nomination for former tánaiste Frances Fitzgerald at the convention in March. Sitting MEP Brian Hayes has announced he will not be seeking re-election.

Earlier two other prominent public figures, Minister of State for Higher Education Mary Mitchell O’Connor, and former Fine Gael TD Lucinda Creighton, had said they would not be seeking to run in the election.

In a statement Dr Reilly said he would be focusing his efforts on regaining the Dáil seat he lost in the 2016 general election.

“I considered the option, and discussed it with my family and political team, supporters and others. However, I have decided to concentrate on winning a Dáil seat in Dublin Fingal at the next general election to provide positive stable government for Ireland and Fingal.

“I wish Frances Fitzgerald every success in her bid for Europe; she’s an excellent candidate,” he added.

Significant tensions have emerged within the Social Democrats contesting the European elections. Co-leaders Róisín Shortall and Catherine Murphy are believed to hold reservations about the party fielding a candidate. That view has led to strains with Dublin councillor Gary Gannon, who is actively pursuing a nomination.

Internally the party has said it would not fund an expensive European challenge which had no guarantee of a successful outcome. The upshot from that is that candidates would have to self-finance their own campaign.

A party spokeswoman said the challenge for a party of its size was how to prioritise resources. She added that the party’s national executive had taken a decision to initiate a selection process. “A number of candidates have come forward, and the internal selection process is under way.”

It comes as a number of Fine Gael Deputies announced they would be seeking the party’s nomination in the expanded Ireland South constituency. Fine Gael already has two MEPs in the enormous five-seat constituency, but both are located in the southwest: Seán Kelly in Kerry and Deirdre Clune in Cork.

On Sunday, Minister of State for Agriculture and Forestry Andrew Doyle announced he would seek a nomination at the convention on March 3rd in Clonmel, Co Tipperary.

The Wicklow TD said on Sunday that Brexit had demonstrated the fundamental role of European politics for Ireland. “At this vital time I believe it is extremely important that all sections of Irish society are represented effectively at European level.”

Mr Doyle’s announcement comes two days after his Dáil colleague Marcella Corcoran Kennedy (Laois Offaly) also declared an interest in running in Ireland South. Her Dáil constituency has been added to Ireland South to accommodate its increase to a five-seater. Sitting MEP Mairéad McGuinness and Mayo-born TV producer Maria Walsh have already been nominated for the four-seat Midland North West.

Galway East TD Anne Rabbitte has become the first woman Fianna Fáil politician to announce she will seek a nomination. Ms Rabbitte told The Irish Times this month she was considering putting her name forward in the Midland North West constituency, and confirmed her candidacy at a party meeting this week.

Another Deputy, Brendan Smith from Cavan, has also announced an interest, as has former TD Niall Blaney and councillor Naoise Ó Cearúil from Kildare.

Fianna Fáil party leader Micheál Martin told his parliamentary party last year he did not want TDs to put their names forward. However, a small number have put their names forward, including senior front-bench member Billy Kelleher, who had “Kelleher for Europe” posters on display along the approach roads to the Citywest Hotel, the venue of the party’s ardfheis this weekend.

Mr Kelleher has put his name forward despite Mr Martin’s opposition to sitting TDs seeking nominations. On Sunday, Mr Martin said he had not prevented Mr Kelleher from entering the process.

Mother (93) has right of residence upheld despite judgment against son 18:16
Man who killed Jastine Valdez shrugged before being shot by gardaí, inquest told 18:09
Yacht captain guilty of drunk sailing had ‘God given right’ to be on Liffey 18:08
Social Democrats to ‘radically scale up’ number of new homes 17:59
Over 65s are expected to ‘crawl into corner and die’, says election hopeful Valerie Cox 17:56
SUBSCRIBER ONLY