Older people to be offered incentives to downsize homes 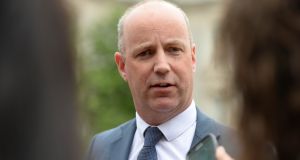 Minister of State with responsibility for older people Jim Daly said under plans to be published on Wednesday ‘age-friendly’ housing estates for older people would be developed. File photograph: Cyril Byrne/The Irish Times

Financial incentives will be offered to encourage older people to downsize from larger family houses to retirement home-type communities, under new Government plans, to be published in a report on Wednesday.

Incentives being considered include allowances around stamp duty and capital gains tax rules, according to Minister of State with responsibility for older people Jim Daly.

The plans would see the development of “age-friendly” housing estates for older people, where they would live in own-door accommodation. The communities would be supported with services, such as primary care and nursing staff, and on-call care attendants.

The housing would be an “alternative” to the nursing home model, Mr Daly told The Irish Times.

Under the plans elderly people would “still get to live behind their own front door”, and benefit from the independence that comes with that, compared with a residential nursing home, he said.

The State providing “small supports” to such communities, would enable people to live independently for longer, Mr Daly said.

The Government was looking at ways to incentivise people to sell their homes and downsize to the retirement-type communities, he said. Options under consideration could include breaks on capital gains tax, or on stamp duty for the “age-friendly” homes.

“Those discussions still have to take place with the Department of Finance,” Mr Daly said.

“We’ve never had any real alternatives to the nursing home model, that has been the same model for the last 30 years,” Mr Daly said. There was a general agreement among departments “we can do better”, in terms of housing options for older people, he said.

The provision of residential housing for older people was a fast-growing area, with a boom in the private nursing home sector, he said.

“A lot of care of the elderly, such as the nursing home sector, is provided privately, so they will be part of the discussion,” Mr Daly said.

When it came to planning permission applications for nursing homes, the Health Service Executive should be a prescribed body, notified when new applications are made, he said. This would allow for more “joined-up thinking” between the private nursing home sector, and the health service, Mr Daly said.

1 Covid-19: Public urged to ‘stay at home’ as 1,025 further cases confirmed in State
2 Transmission of Covid-19 on flight into Ireland linked to 59 infections
3 Doctors are being asked to ‘play God’ in deciding who to give flu vaccine to – GP
4 President signs Bill on mother and baby home records into law
5 Two hundred Irish retailers for all your online Christmas shopping
Real news has value SUBSCRIBE