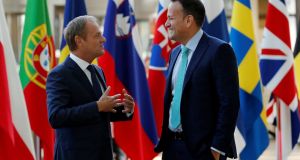 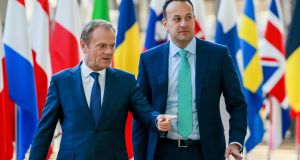 Taoiseach Leo Varadkar (right) is welcomed by European Union Council president Donald Tusk ahead of a meeting to discuss Brexit in Brussels on Thursday. Photograph: EPA

Speaking to journalists in Brussels following meetings with European Council President Donald Tusk and the EU chief negotiator Michel Barnier, Mr Varadkar said he had yet to see any specific proposals but warned of “constraints” on the ideas being touted in draft British “hybrid Chequers” plans to resolve the backstop impasse in talks.

These are based on accepting an all-UK customs union with the EU to obviate the need for a border between the UK and Northern Ireland.

The Taoiseach also made clear that the Government does not see the need for a consent clause in the EU Withdrawal Agreement which would require approval from the Northern Ireland Assembly for regulatory controls between the two islands.

Mr Varadkar also strongly backed a rebuke by Mr Tusk to British Foreign Secretary Jeremy Hunt over his comparison of the EU to the Soviet Union.

“Comparing the European Union to the Soviet Union is as unwise as it is insulting,” Mr Tusk said at their joint press conference. “The Soviet Union was about prisons and gulags, borders and walls, violence against citizens and neighbours.

“The EU is about freedom and human rights, prosperity and peace, life without fear, it is about democracy and pluralism; a continent without internal borders or walls. As the President of the European Council and someone who spent half of my life in the Soviet Bloc, I know what I’m talking about.”

Urging caution on the UK’s custom union idea he said that “there would be constraints, a lot of countries would take the view that a UK-wide arrangement is really a matter for the future relationship which is about Ireland and Northern Ireland”.

Have arrived in Brussels for an afternoon of meetings on #Brexit. The negotiations are entering a critical phase, and time is running out. But I believe that an agreement is possible, with the right political will and focus on all sides. First meeting with @eucopresident pic.twitter.com/JRWFTpkf9B

“I would feel strongly about this too that any kind of trade arrangement must have a level playing field.”

Mr Tusk said that the EU “wants a relationship with the UK that is as close and special as possible”.

“From the very beginning, the EU offer has been not just a Canada deal, but a Canada+++ deal – much further-reaching on trade, on internal security, and on foreign policy cooperation.”

The Canadian agreement with the EU is a straightforward free trade deal which the EU has suggested for months could be tailored to UK needs if it insists on retaining its red lines on membership of the customs union and single market. Such a deal, however, would not remove the need for border controls and so would have to complement a Northern Ireland backstop.

Mr Varadkar, whose meetings were part of preparations for the EU summit in a fortnight, said the EU and UK were entering “a critical and decisive stage in these negotiations” and expressed confidence that “there is a good opportunity to clinch a deal over the next couple of weeks”. A special summit would be convened in November but only if “decisive progress” was made in October, he said.

“I’m doing my best as Taoiseach to make sure that we never return to any bloodshed on the island and that means standing by and defending the Good Friday Agreement which brought peace to Britain and Ireland.”

Earlier, Mr Varadkar and Mr Tusk called for an acceleration of the Brexit talks as the key summit looms in less than a fortnight.

Mr Varadkar said they were entering what will be a critical phase of the negotiations and called on the parties to “get down to business” if they were to get an agreement “by November if at all possible”.

His reference to November suggests that the Taoiseach may believe there are opportunities to bridge the gap between the EU and the UK in the next couple of weeks ahead of the October summit – November’s meeting will only be called if there is substantial progress.

The Taoiseach again emphasised Ireland’s four key objectives in the talks: the survival of the Common Travel Area with the UK, the retention of a frictionless border on the island, the protection of citizens’ rights in Northern Ireland – he emphasised that Northern Ireland citizens will retain their right to be EU citizens – and ensuring as close a trading relationship with the UK as possible in the long term.

With the British prime minister Theresa May having successfully come through her party conference yesterday, officials and politicians believe that long-awaited British proposals on the border backstop – which guarantees an open border in Ireland – will be made in the coming days.

There is a growing sense that the gap between the British and Irish governments over the border could be closing, with Mrs May prepared to accept some checks on goods travelling between Britain and Ireland, but away from the border.

While the EU will await the detail of the British proposals before evaluating whether they match expectations, there is a belief Ms May is preparing to make concessions which will arouse opposition among Brexiteers and in the DUP, according to four senior sources with involvement in the process in Dublin.

The DUP has threatened to pull the plug on Mrs May and vote against any deal that would place a border in the Irish Sea, but sources say all efforts are being concentrated on persuading opponents that these checks would not be in the “Irish Sea”.

“A lot of this is about language: if the checks are not being done, for example, in transit, on vessels, this is not the border,” said a Dublin source.

The taoiseach can expect a show of support from EU politicians, who have long insisted there will be no Brexit divorce deal without agreement on the Irish border.