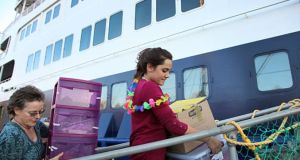 A student moves into a cruise ship that has been turned into a floating dorm at St Mary’s College of Maryland in the US. Photograph: Getty

Potential plans to house homeless people on a rented cruise ship by Dublin City Council have been rejected by Minister for Housing Eoghan Murphy.

A spokesman for Mr Murphy said he had “ruled out” a proposal to house homeless people on a cruise ship, in response to the current crisis.

The local authority had explored renting a cruise ship from a private operator, to house between 100 and 150 single homeless individuals, before shelving the idea.

Mr Keegan was responding to letters sent by Mr Murphy to the four Dublin local authorities, setting targets to provide additional homeless family hub accommodation and rough sleeper beds. Details of the correspondence, obtained under the Freedom of Information act, were reported in The Irish Times on Thursday.

In a post on Twitter Mr Murphy said the cruise ship idea “is not suitable for homeless families in need,” and “better more appropriate solutions” were being pursued by the Dublin Region Homeless Executive every day.

In his letter, Mr Keegan said targets set by Mr Murphy to house 300 extra homeless families in family hub accommodation by the end of the year were “unlikely to be achieved.”

The chances of meeting targets for extra family hub and rough sleeper beds, would be increased if some previous council proposals, such as the cruise liner plan, “were revisited,” Mr Keegan said.

Brendan Kenny, head of the council’s housing services, said the local authority had previously weighed up the cruise ship idea two years ago, but it “never really got legs,” he said. The plan had been considered for single homeless adults, and “would not be suitable” for homeless families, Mr Kenny said.

In a statement on Thursday Dublin City Council confirmed it had considered the “possibility of leasing a cruise ship to be berthed in Dublin Port.”

The statement said the proposal would offer advantages such as “speed of delivery,” and provide apartment type accommodation at a “competitive cost”.

However the plan was no longer being considered as the local authority was confident it would be able to source sufficient beds for rough sleepers this winter “without the need to lease a cruise ship,” the council said.

Debating the issue on the RTÉ Radio One Today with Sean O’Rourke show, homeless campaigner Fr Peter McVerry said the plan was “off the wall,” and Labour Party Senator Aodhán Ó Ríordáin labelled it a “disgusting idea.”

Dublin City Council Fine Gael councillor Paddy Smyth defended the proposal, saying similar models of housing were used for students [in other countries], and the accommodation would be better than housing homeless people in hotels.

Housing homeless people on private cruise liners has been proposed previously in Auckland, New Zealand, and San Francisco, in the United States.

Enda McGuane, managing director of Winters Property management, said the plans did not progress past the initial stages.

The project was “doable,” but with significant costs, which would result in “unaffordable” rents being charged to students in excess of €250 a week, Mr McGuane told The Irish Times.

“We did a feasibility study on it, costed it through … in the end it just didn’t stack up,” he said.