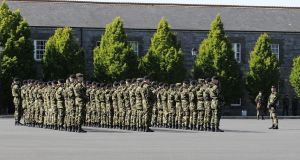 About 120 Defence Forces personnel due home this week will remain in the Middle East because of a bureaucratic error caused, it is being alleged, by the Department of Defence.

The error is understood to have prevented the troops crossing a frontier to start their journey back to Ireland from Syria.

A knock-on effect of the delayed return is that a similar number of Defence Force personnel have to remain in Ireland instead of being deployed in rotation to relieve those due to return.

In the case of those who were due to return to Ireland, families who had booked holidays and scheduled other family events are having to make other plans.

Nuala Walsh, the wife of a soldier whose return from a tour of duty in the Golan Heights has been delayed, said that trying to explain to their two daughters that their father will not be home for another two weeks was “like cancelling Christmas.”

Ms Walsh from Ballyfermot, Dublin, told RTÉ’s News at One, that she and her daughters had been counting down the days until her husband returned. Her seven year old daughter Madison had been marking off the days in her homework journal and her teacher and school principal were aware of the impending arrival of her father.

They found out on Monday evening that her husband would not be home this week and had to break the news to Madison who cried herself to sleep on Monday night and woke several times, saying she could not stop dreaming about her daddy.

Madison is still very distressed and keeps asking if her daddy is okay and when he is coming home, she added.

This was too big a mistake for the Department of Defence to make, she said. Adults might understand but “there are little boys and girls all around Ireland who are devastated that their Daddies or Mammies are not coming home today.”

In the Dail on Wednesday morning the minister of state with responsibility for the Defence Forces, Paul Kehoe, said he expected the troops to be able to start their journey home on October 15th. He announced compensation to each serving member affected of €1,000.

Mr Kehoe is due later on Wedneday to address the annual conference of PDforra, the Defence Forces’ rank and file representative organisation. The president and general secretary of the organisation said there must be an investigation into what had happened.

The problem concerns the 57th Infantry Group, a force reserve company that provides a rapid reaction response to threats against the United Nations observer force in an area of separation between Israeli-occupied Golan Heights and Syria proper.

The 57th had completed a successful mission, during which UN presence in the area was more fully established between the two UN camps, Ziouani and Faouar, and were poised to return home.

Meanwhile in Ireland, men and women with the 58th Infantry Group were due simultaneously to rotate with them. They are now stuck at home having completed training and said their family farewells.

However, whereas previously such rotations had taken place from the Golan Heights through Israel and back to Ireland via Tel Aviv, on this occasion the rotation was to be from Syria into Lebanon and thence back to Ireland.

Sources at the PDforra conference for rank and file members of the Defence Forces claim one of two explanations for the error - or a mixture of both.

One assertion has it that the Department of Defence incorrectly filled out a form for the Lebanese authorities, stating - wrongly - that the troops leaving Syria and transiting through Lebanon were troops with Unifil, the UN force in southern Lebanon to which Ireland also contributes. In fact the troops trying to get home are part of the UN force called Undof operating between the Israeli-occupied Golan Heights and Syria proper.

Another version is that because this was the first rotation of Irish Undof troops from Syria into Lebanon, and from there onward to Ireland via Beirut, the necessary clearences were not obtained from the Lebanon authorities for soldiers crossing into their country from Syria.

PDforra criticised the delay. “Families have planned holidays, confirmations, birthday parties and other events, all based on our troops coming back when it was said they would be back,” said the organisation’s president, Mark Keane.

“PDforra believe this delay is unacceptable,” said general secretary Ger Guinan. “We are going to demand that the minister answer our questions and tell us when these troops are going to be home and why this incident occurred.

This cannot be allowed recur.” A two week wait for men and women to come home after six months’ on duty was “totally unacceptable” and there had to be “some way” for the Minister to circumvent the problem that had arisen, said Mr Guinan.

“We are led to believe that it was an administrative failure and are waiting to be briefed by the department,” he added.

Mr Keane said it was disappointing that such an error had occurred. “We are a military organisation. We are supposed to function on logistics and proper arrangements,” he said.

In the Dáil, Mr Kehoe said he was acutely aware of the impact on the personnel affected and their families.

He explained that all diplomatic clearances had been received for the flight but “an issue arose unexpectedly in relation to the clearances on Monday morning”.

He rejected a claim by Fianna Fáil defence spokesman Jack Chambers that the Department of Defence did not follow proper diplomatic protocol.

Mr Chambers said the HR section of the department did not follow proper procedure and there was “massive dismay” among personnel and their families.

The Dublin West TD said “the Department of Defence has clearly breached its own process around diplomatic protocol”.

But the Minister insisted it was nothing to do with the HR section of the department. He said that as soon as the delay was known “the personnel and their families were contacted and advised of the issue and the postponement of the rotation”.

He told the Dáil that personnel delayed would received a €1,000 in recognition of the disruption caused to their families.

The Minister said that their 30 days post-deployment leave would not now commence until after their return home.

Taoiseach Leo Varadkar expressed his apologies for the delay. In the Dáil Mr Varadkar, who is Minister for Defence said it was “a very unfortunate situation”.

He said specific diplomatic clearances are required for military personnel.

Additional clearances were required for Undof personnel and this involved multiple countries, some with unstable administrations, he said.

Labour leader Brendan Howlin said personnel were told that there was an “administrative error in paper work that didn’t allow them to transit Lebanon”.

He said many personnel had holidays and birthday parties planned because they had expected to be home.

Mr Varadkar said: “I extend my apologies to those member of the Defence Forces who are affected.”

He said the €1,000 payment was to defray expenses for personnel.

Mr Kehoe said the Departments of Defence and Foreign Affairs made every effort to resolve the matter but it could not be done to allow the rotation of personnel on Tuesday.

Mr Kehoe had also contacted Ireland’s honorary consul in Beirut Georges Siam in an attempt to resolve the situation.

He pointed out that rotation flights through Beirut were confined to certain days and times.

“Given these constraints, the timelines necessary to secure diplomatic clearances, and the primacy of ensuring a safe and secure transit through Syria and Lebanon for the rotating contingents, it is now planned to rotate the contingents on Monday the 15th of October, 2018.”

1 Miriam Lord: The left limbers up to woo Mary Lou
2 ‘I don’t know if he died . . . but I don’t want him in the Tuam tanks’
3 Election 2020: Government officials express concern over pension reform promises
4 Eyewitness to Auschwitz: ‘We were held in the wagons like animals’
5 New coronavirus is increasingly likely to spread to EU, health bodies warn
Real news has value SUBSCRIBE