Inside Politics: Taoiseach misses point when it comes to student nurses and well-off public servants

No prime minister could accept the demands the European Union is currently making as the price for a trade deal, Boris Johnson said ahead of crunch talks. Video: UK Parliament 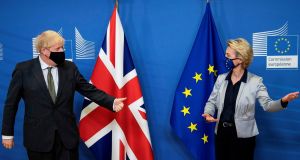 British prime minister Boris Johnson and Ursula von der Leyen, the president of the EU Commission, had their dinner in Brussels last night as talks drag on. Photograph: Aaron Chown

The way things are going in Brexit negotiations it would be no great surprise to see Noel Edmonds rock up to 10 Downing Street on Sunday with a box in his hand. Boris Johnson would then open it to let everybody know (including himself) if it’s deal or no-deal.

It all feels so random. The brand of brinkmanship being played by the British prime minister just doesn’t seem to have depth behind it other than to placate the visceral detestation of the party’s Brexiteers for all things Europe.

3 Q&A: Covid vaccine side effects – What are they, who gets them and why?

4 Unionism not emotionally ready for conversation about united Ireland

6 Tenant promises to pay compensation after removing rafters from house

7 ‘They could have killed me’: Man pushed off bicycle while cycling at Sally Gap

10 Food and mood: Why nutritional psychiatry is attracting attention

17 Galen Weston, owner of Brown Thomas and Arnotts, has died

18 TV View: McManaman despairs as upbeat Owen looks on the bright side

24 Q&A: What now for AstraZeneca and Johnson & Johnson vaccines?

27 The Music Quiz: Which Britpoppers once covered Whiskey in the Jar?

29 Maternity leave during lockdown has its advantages

30 The Khmer Rouge controversy: Why colourising old photos is always a falsification of history

34 My ex-husband wants me to sign away my land to him. Do I have to?

39 Gordon D’Arcy: Béibhinn Parsons is the gift, IRFU must now do the giving