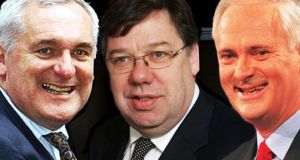 The Government’s controversial decision to restore the full pension to the highest-earning public servants, including former taoisigh, and awarding a 2 per cent pay rise to judges will cost the Exchequer €17 million per annum.

The Department of Public Expenditure on Wednesday disclosed that the cost of restoring pension cuts to almost 4,000 senior public servants was €12 million per annum.

In addition, the 2 per cent pay rise to the country’s 160 judges, agreed by Cabinet on Tuesday, will cost the Exchequer €500,000 per annum.*

The two announcements made this week have met with a storm of protest from Opposition parties, who have contrasted what they describe as “extravagant” pay increases for top-tier public servants with the Government’s refusal last week to consider paying student nurses working on hospital wards during the Covid-19 pandemic.

Taoiseach Micheál Martin and Tánaiste Leo Varadkar have both faced a barrage of criticism from their own parliamentary parties, with claims by TDs of a Government “own goal” on the issue.

The pension changes mean that swingeing cuts introduced by government in 2011 will be fully reversed. It affected only senior public servants, including Ministers, judges and hospital consultants who had earned salaries of €108,000 or more per annum and had retired before 2012 with a pension of €54,000 or more.

Former taoisigh such as Bertie Ahern, John Bruton and Brian Cowen with current pensions of €134,500 will see their pensions increase to €151,680 per annum.

The 2 per cent pay increase for judges follows a similar increase for all public servants in October as part of the latest national agreement. However, because of their independent role the 160 judges are not classified as public servants, and a separate process had to be initiated to implement their increase.

Chief Justice Frank Clarke has waived his increase of just under €5,000. High Court and Appeal Court judges are in line to receive increases of over €4,000.

At a meeting of the Fine Gael parliamentary party on Wednesday night several TDs voiced concern at how the issue had played out at their expense, and at the dominant role of Sinn Féin on social media.

Sources say Mr Varadkar told TDs the issue was pure party politics, and that the motion on student nurses was a “cynical” exercise by the Opposition.

It is understood former minister for justice Charlie Flanagan said that Fine Gael was left “carrying the bucket”, and that it should have been clearer about the fact that there was a review of nurses’ pay under way.

*This article was amended on December 10th, 2020 to correct an error