Teams to continue talks on post-Brexit trade deal and ‘we will come to a decision by the end of the weekend’, says EC President

No prime minister could accept the demands the European Union is currently making as the price for a trade deal, Boris Johnson said ahead of crunch talks. Video: UK Parliament 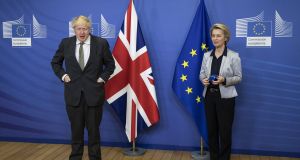 Boris Johnson and Ursula von der Leyen, president of the European Commission, ahead of a dinner meeting at the Berlaymont building in Brussels. Photograph: Aaron Chown/PA Media/Bloomberg 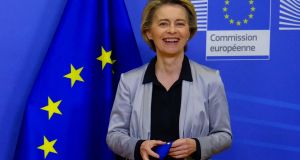 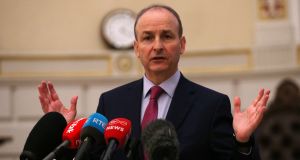 British prime minister Boris Johnson and European Commission President Ursula von der Leyen have finished engaging in what were characterised as crunch Brexit talks in Brussels for the night.

Mr Johnson left the European Commission headquarters after dinner and around three hours of talks with Dr von der Leyen.

Afterwards, Dr von der Leyen said: “We had a lively and interesting discussion on the state of play across the list of outstanding issues.

“We gained a clear understanding of each other’s positions. They remain far apart.

“We agreed that the teams should immediately reconvene to try to resolve these essential issues.

“We will come to a decision by the end of the weekend,” her statement concluded.

Developments were being keenly watched in Dublin, and a source familiar with the Irish Government position said: “The talks aren’t dead anyway - but they are on a ventilator”.

Meanwhile, a senior Downing Street source said Mr Johnson and Dr von der Leyen had agreed the UK and EU would continue talks after their meeting, but that a “firm decision” should be taken about the future of the discussions by Sunday.

In a statement, the Number 10 source said it was “unclear” whether the differences between the two sides could be bridged.

“The PM and VDL had a frank discussion about the significant obstacles which remain in the negotiations. Very large gaps remain between the two sides and it is still unclear whether these can be bridged.

“The PM and VDL agreed to further discussions over the next few days between their negotiating teams.

“The PM does not want to leave any route to a possible deal untested. The PM and VDL agreed that by Sunday a firm decision should be taken about the future of the talks.”

EU diplomats had previously said there was little chance a deal would be agreed tonight, and the most likely outcome was that the pair would agree to keep negotiating in a race against time.

Incidentally, on the menu was pumpkin soup and scallops for starters. The main course included steamed turbot and mashed potatoes with wasabi. For desert, there was pavolova with exotic fruit and coconut sorbet.

“Allons-y,” Dr von der Leyen had said to Mr Johnson, using a French term for “let’s go”, after they had greeted each other and taken masks off for photographs.

“Allons-y,” Mr Johnson replied, as they headed off for dinner on an upper floor of the star-shaped 1960s modernist Berlaymont building.

Earlier, Mr Johnson had tweeted: “A good deal is still there to be done. But whether we agree trading arrangements resembling those of Australia or Canada, the United Kingdom will prosper mightily as an independent nation.”

But Taoiseach Micheál Martin, who travelled to Brussels for the European Council summit, had warned that “we are on the precipice of a no-deal”.

Mr Martin said in the Dáil that it remained to be seen how Mr Johnson and Dr von der Leyen “can rescue the situation” in their talks tonight.

“The matter is on a knife edge. As I have said previously it is 50-50. There are difficult issues regarding level playing fields and our own fisheries,” Mr Martin said.

Meanwhile, Tánaiste Leo Varadkar told Fine Gael TDs that the Government is preparing to intervene on behalf of food and drink exporters if there is a no-deal Brexit in January.

Sources at the Fine Gael parliamentary party meeting on Wednesday evening said Mr Varadkar told TDs he did not want to say too much about the Government plans, but that some exporters could find their products permanently off the shelves if potentially high tariffs come in.

He said Government would have to intervene and that while he could not go into too much detail, there was work ongoing.

Mr Varadkar reportedly said it was currently 50-50 as to whether or not a post-Brexit trade deal can be struck and that the outstanding issues around fisheries, and in particular a level-playing field, “hang in the balance.”

He also said the Government has encouraged the EU to show the “maximum flexibility and creativity” in the days ahead, but told his party TDs and Senators that the negotiations had come so far thanks to European solidarity.

This week represents “our last best chance” to resolve outstanding issues, he added.

Sources said Mr Varadkar also spoke out against a school of thought that even if there was a no-deal scenario, all parties would come back to the table anyway. He said once people were away the table, it would be hard to put them back, sources claimed.

Meanwhile, there remains little expectation in Dublin of any significant breakthrough at tonight’s dinner meeting between Dr von der Leyen and Mr Johnson, but Government sources hope negotiations can continue over the coming days to produce an agreement before Christmas.

Tonight’s dinner, which begin after 7pm, had been billed as a ‘make or break’ moment, but senior officials did not expect any dramatic news from the encounter.

The EU side is understood to be wary of making any significant compromises which could be unpicked by member state leaders when they gather in Brussels for the summit.

There is growing impatience among many member state governments on the continuing Brexit issue, when their countries are only marginally affected. Instead, the Commission will try to keep options open and maintain flexibility on both sides with a view to concluding an agreement after the summit.

One minister had also downplayed the prospects for any breakthrough this evening, suggesting that the German Chancellor Angela Merkel, whose country currently holds the rotating presidency of the EU, does not want the summit to be overshadowed by the Brexit debate.

Mr Martin is understood to have been in contact with both Ms von der Leyen and Mr Johnson in recent days.

Separately, it is understood that Dr von der Leyen has briefed European People’s Party (EPP ) leaders, including Mr Varadkar, on the prospects for an agreement, indicating that while there is no immediate prospects of a deal, an atmosphere which would enable a deal can be created in the coming days.

Earlier in the Dáil, Independent TD Michael Collins claimed Ireland had a “weak hand” in negotiations and fishermen in Castletownbere and other areas of his Cork South-West constituency would also be most affected by a 5 per cent reduction in whitefish fleet fishing next year.

But dismissing his claim, Mr Martin said: “We need less of the language about weak hands and all of that kind of nonsense. Brexit resulted from a decision taken by the British people.

He said if there is no deal “it would be a worse result for our fishing”.

Earlier, Mr Johnson said no British prime minister could accept the demands the European Union is currently making as the price for a trade deal.

Talks have faltered on the issues of fishing rights, the “level playing field” measures aimed at preventing the UK undercutting the EU on standards and state subsidies, and the way that any deal would be governed.

At Prime Minister’s Questions in London, Mr Johnson said: “Our friends in the EU are currently insisting that if they pass a new law in the future with which we in this country do not comply or don’t follow suit, then they want the automatic right to punish us and to retaliate.

“Secondly, they are saying that the UK should be the only country in the world not to have sovereign control over its fishing waters.

“I don’t believe that those are terms that any prime minister of this country should accept.”

Minister for Foreign Affairs Simon Coveney said people should brace themselves for the “distinct possibility” that the EU and UK will fail to reach an agreement to prevent a crash out no deal Brexit.

The inability of London and Brussels to reach full agreement to date on the future relationship between the UK and the bloc did not bode well for any further progress, he suggested.

“This is something that can be resolved with the right approach from both sides this evening. But the inability to resolve it to date means that failure is a distinct possibility at this stage and we need to be ready for that,” Mr Coveney said.

Mr Coveney criticised the British for damaging trust in the negotiations and warned any attempts to further extend talks into the new year – with significant gaps remaining between the two sides – was a “ really unlikely, remote possibility”.

“Anything is possible but I think that is very unlikely,” he told Newstalk.

“I think the EU have really had enough of this. What they are looking for now is certainty, even if that means no deal contingency planning.”

The British government “quite frankly have really damaged the trust in these negotiations because of their actions, particularly in recent months” by threatening to renege on the withdrawal agreement and the Northern Ireland protocol, he added.

Mr Coveney said the EU wanted to focus more on other pressures now, including the pandemic, migration and rule of law issues in some countries.

“The EU wants to move on from Brexit and leave it behind us, and the idea that we would extend and go to great lengths to facilitate an extension – because that is what we would need to do legally – the extension of further negotiations and talks around Brexit into the new year, I think, is a really unlikely, remote possibility,” he said.

Earlier, Mr Varadkar said Mr Johnson was “probably” willing to make concessions on common standards with the EU to secure a deal in Brussels, but British sovereignty issues will be “hard to square”.