Warehouse space scarce due to Brexit, Covid and Christmas stockpiling

Brexit warning: ‘If the processes are not working on January 1st, there will be hell’ 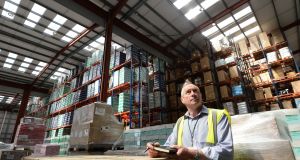 Stockpiling for Christmas, the Covid-19 pandemic and to avoid the January disruption from new post-Brexit customs arrangements have led to shortages of warehouse space, according to storage and distribution businesses.

Concerns about importing goods from Britain after the UK’s departure from EU trade rules from the start of next year have forced businesses to hoard goods in contingency planning.

Businesses have been stockpiling to protect the continuity of supplies in the weeks and months after Brexit and to avoid the initial impact of price increases if tariffs are introduced on goods should the EU and UK fail to agree a future trade deal to avoid duties on imports and exports.

“There has been stockpiling going on for the last few weeks for sure. In April and May our warehouse was almost empty. Now we are absolutely chock-a-block and most warehouses are.”

Conor Whelan, chief executive of Stafford Lynch, a Dublin-based distributor for brands from Schwartz herbs and spices to Energizer batteries, said the wholesale and distribution industry has been hit with a “treble whammy” of managing stock for Christmas, Covid-19 and Brexit.

“We have the golden quarter, which is our biggest trading period. You have got Covid, which has driven volumes because of the restrictions and the only essential retail being open is grocery. Then you have a stock-build for Brexit contingency. It is three in the one go,” he said.

Mr Whelan expects his warehouse space to be full by the end of the year as UK businesses seek to stockpile products as a contingency in advance of potential disruptions from Brexit.

“The contingency plans that a lot of businesses are putting in place is to build stocks, and obviously the warehouses don’t have flexible walls so there is a limited amount of space available,” he said.

“Supply chains are going to be under a lot of pressure. We don’t know how extensive or significant the delays at ports will be. The consensus is very much that we are all going to experience challenges.”

Mr Thornton said that most companies that needed critical supplies had been prudent and had stockpiled but some businesses were still not ready for Brexit.

“We have certainly had a significant increase in calls from people who are in the last throes of trying to prepare and maybe should have taken action earlier,” he said.

Owen Cooke, chairman of the Independent Express transport group and the Pallet Network storage, said that companies were desperate for more warehouse space that is not there.

“We are tight on working space, very tight,” he said.

The surge in online sales during the pandemic has meant retailers are holding more goods in warehouses rather than in their shops, while, because of Brexit concerns, Irish distributors of UK products are holding stocks in Ireland that British companies have not held in storage before.

In a sign of stockpiling ahead of the end of the Brexit transition period, Dublin Port reported October was the second busiest month in its history, with traffic volumes replicating patterns seen in the first three months of 2019 before an expected Brexit deadline.

Department of Transport official Eddie Burke said this week that trade volumes through the port could be depressed for the first week or two of January due to stockpiling.

Revenue has said that some businesses may have stockpiled to avoid having to deal with new customs paperwork on British goods until later in January or February.

Mr Cooke said that stockpiling would not prevent businesses having to ship large volumes after working through stock held in limited amounts of storage.

“The stockpiling may result in some reduction in the early weeks of the year but I don’t think it is going to be a huge reduction,” he said, warning about new post-Brexit Border arrangements.

“If the systems and processes are not working on January 1st, there will be hell.”