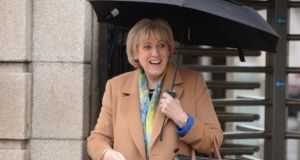 Minister for Social Protection Heather Humphreys said she had spoken to musicians and members of the entertainment industry directly and “they have explained that this would make life easier for them when it comes to one-off gigs”. File photograph: Dara MacDónaill

Musicians and performers are among self-employed workers set to benefit from an increase in earnings they will allowed to make before their pandemic unemployment payment (PUP) is affected.

Minister for Social Protection Heather Humphreys announced that PUP recipients can now earn up to €960 over an eight-week period and keep the weekly €350 social welfare payment.

Currently recipients can engage in limited self-employment and earn up to €480 over a four-week period and continue to maintain entitlement to PUP, a provision introduced on Budget Day.

Ms Humphreys accepted amendments from Sinn Féin and Independent Joan Collins to the Social Welfare Bill, which will allow musicians and others accept casual gigs without having their payment affected.

The Bill gives effect to provisions announced in the Budget with a record €25.1 billion allocated to social protection, more than €4 billion extra than in last year’s Budget.

Much of the additional spending is to meet the costs of Covid-19 supports including the PUP.

The Bill also provides for keeping the state pension age at 66 pending the outcome of a newly established pensions commission which will report in a year.

Ms Humphreys said she had spoken to musicians and members of the entertainment industry directly and “they have explained that this would make life easier for them when it comes to one-off gigs”.

Artists and other self-employed people have been able to earn €480 over four weeks since Budget Day and still keep their PUP.

“I know this measure has been warmly welcomed by our taxi drivers, musicians, electricians, plumbers and other self-employed workers across the country,” Ms Humphreys said.

The Minister added that everyone wanted to get musicians and artists back performing as soon as possible.

“That’s important because when you’re a musician, you could have a gig one week and then maybe nothing for the next four weeks so I hope this change to €960 will help them in that respect,” she said.

“These are important provisions which allow self-employed people to carry out some work and still retain the PUP.”

Ms Humphreys acknowledged the “constructive engagement” from Jackie Conboy of the Music and Entertainment Association of Ireland (MEAI).

The MEAI later tweeted that “this is such great news”.

Sinn Féin social protection spokeswoman Claire Kerrane welcomed the Minister’s decision to accept the amendment to ensure musicians will not have to face losing the PUP due to accepting casual gigs.

Ms Kerrane said she hoped the amendment would help ensure “musicians get the support they need and deserve.

“I also hope that it will assist others who are self-employed in earning and keeping the PUP.”

She said “workers in the arts and music sector must not be forgotten about in this time of crisis”.