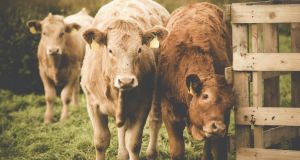 The support package will be made up of funds from the European Union and the Exchequer.

The support scheme will open from the third week of August, and will mean beef farmers can claim aid of €100 per adult cattle slaughtered, for up to 100 cattle per herd, between last September and May 2019.

Farmers can also claim €40 per suckler cow that calved over the course of last year, for up to 40 sucklers per herd.

Only dairy herds of less than 40 cows will be eligible for the Brexit aid support, department officials said.

Announcing the measures, Mr Creed said he was “keenly aware that the past few months have been very difficult for beef farmers.

“There has been a prolonged and exceptional period of depressed prices since last autumn, with the ongoing uncertainty surrounding the outcome of Brexit, among other factors, contributing to this market disturbance,” he said.

There are conditions on the aid for farmers, and applicants must be members of a Bord Bia Quality Assurance Scheme, or an Department of Agriculture environmental scheme.

Slaughtering factories will not be eligible for the support, and in the event the scheme is oversubscribed payments may be subject to “minor revision,” officials said.

“The availability of this EU and Exchequer support, together with the Beef Environmental Efficiency Pilot (BEEP) introduced earlier this year, provides an injection of up to €120m in aid for the beef sector in 2019,” Mr Creed said.

In recent weeks the Government has come in for criticism over the EU-Mercosur deal, which will see tariffs cut and some 99,000 tonnes of South American beef allowed into the European market every year, which the Irish agriculture lobby said will hurt struggling beef farmers.

Fianna Fáil spokeswoman on Brexit Lisa Chambers said while the €100 million package was welcome, it came “quite late in the day”.

“Businesses and farmers need to know what will the trading environment be post-Brexit, what the support package will be - not only what the Irish Government are going to put in place for farmers and businesses, but that the EU will put in place,” Ms Chambers said.