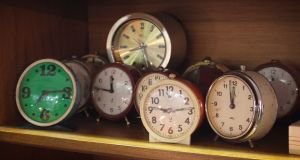 Earlier in 2019, the European Parliament voted to abolish the custom of changing the clocks by an hour in spring and autumn by 2021. Photograph: Bryan O’Brien

The Government is set to oppose an EU proposal to end daylight savings time because it could mean Northern Ireland and the Republic being in different time zones, among other concerns.

Minister for Justice Charlie Flanagan will on Wednesday seek the approval of Cabinet to oppose the move and is also expected to lobby other EU member states on the issue.

The European Commission last year announced it would propose a directive to member states and the European Parliament to abolish twice-yearly clock-switching.

Earlier this year, the European Parliament voted to abolish the custom of changing the clocks by an hour in spring and autumn by 2021.

Although member states have the sole prerogative to decide what time zone they are part of, the commission says the union collectively has the right to determine whether countries make the summertime switch within those time zones.

In Ireland, should Brexit go ahead and the UK decides to keep the summertime clock change, clocks in Northern Ireland would continue to go forward an hour on the last Sunday of March and back one hour on the last Sunday of October. Clocks in the Republic would remain unaltered, with both parts of the island out of step for seven months every year.

The UK is also opposed to the proposal.