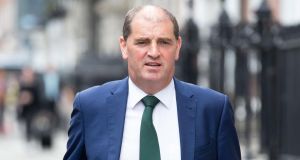 Minister of State at the Department of Defence Paul Kehoe: accused of being “an empty vessel who makes a lot of noise but the exodus of Defence Forces personnel continues”. Photograph: Tom Honan

Fianna Fáil has claimed that many in the defence community have lost confidence in Minister of State at the Department of Defence Paul Kehoe over pay, recruitment and retention issues.

The party’s spokesman on defence Jack Chambers said on Sunday Mr Kehoe’s refusal to acknowledge the crisis had pushed morale to “rock bottom”.

However, Mr Kehoe stood over his record in the face of renewed calls for him to be sacked.

The latest came at the weekend from retired defence forces Brig Gen Ger Aherne, who said Mr Kehoe should “be fired”.

He claimed Mr Kehoe had made uninformed comments about why two naval vessels were taken out of service. The Minister had said routine maintenance was the reason but Taoiseach Leo Varadkar partly contradicted him by saying it was because of staff shortages and maintenance.

Mr Kehoe’s comments also ran counter to the account given by the flag officer for the Naval Services, who also cited personnel issues.

The spokesman cited the implementation of recommendations of a pay commission, which meant higher takehome pay for Defence Forces personnel. That included new pay-scales for 3-star privates, he said.

“Under his direction, the Naval Service participated in its first overseas military mission, Operation Sophia. He has investment in equipment, including ships and aeroplanes, and barracks across the country,” said the spokesman.

Meanwhile, Mr Chambers argued morale had been “at an all-time low for many months now. Instead of acknowledging the recruitment and retention crisis, it continues to be dismissed by government.

“Mr Kehoe is an empty vessel who makes a lot of noise but the exodus of Defence Forces personnel continues with morale at rock bottom.

“The Minister sought to publicly undermine and contradict military management regarding the manpower issues for the two docked naval vessels which was distasteful and disrespectful.

“The Government is taking for granted and exploiting the loyalty and respect the Defence Forces show to the State by neglecting their pay and conditions,” he said.

Retention of specialist positions in the Defence Forces has been a recurrent theme over the past number of years, as highly trained personnel in aviation and intelligence have been recruited by airlines and the technology sector.

The Air Corps is under strength by 30 per cent at present, it is understood, and the situation would be more acute if senior officers who normally perform desk duties were not still involved in flying.

The issue of staff shortages, and its effects on the Air Corps, has also been raised by Independent Senator Gerard Craughwell in the Seanad in recent months.

Night flights from Baldonnel have been restricted because there are insufficient air traffic controllers.

Because of a lack of technicians, both fixed-wing (PC9) aircraft and AWPW139 helicopters are being sent abroad for maintenance to countries such as Belgium, Switzerland, Germany and the UK.

The Defence Forces have also had difficultly retaining specialists in cyber security and military intelligence, as their skills are in great demand in the technology sector.

The Irish Times understands that the two slots for the Defence Forces at the National Cyber Security Centre are not filled at the moment, because of a lack of personnel to second to those positions.

However, the Department of Communications, which has overall responsibility for the centre, said it would not discuss personnel issues on security grounds. Some former members of the Defence Forces are now staff members of the centre.