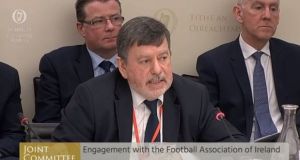 The president of the Football Assocation of Ireland Dónal Conway has responded to a strongly worded letter from Minister for Transport, Tourism and Sport Shane Ross asking him to withdraw his nomination to continue in the role.

Mr Conway is the only person nominated for the role to be decided at the association’s AGM on July 27. Vice president Noel Fitzroy has also been nominated for another term in the role but he faces competition from two other contenders.

In a letter to Mr Conway sent on Tuesday, Mr Ross has contended he has reneged on a promise that the entire board would step down at the AGM to allow for a new board to be constituted.

He also excoriated the five-day window for nominations to be made and the fact that only a very limited number of senior FAI members were entitled to make nominations.

Mr Ross said Mr Conway’s effective reelection as president was a “reversal of your promise to bring reform to the FAI under a new leadership.

“Together with your decision to appoint former FAI employee and loyalist, Noel Mooney to the post of general manager, this development means that the new regime has a very old look about it,” he states.

Mr Ross was highly critical of the nomination process which he said fell short of the transparency and democracy expected of an organisation adhering to good governance.

“Could you explain why nominations for election to the posts of president and vice president were not sought earlier than 7 July and why it was necessary to close the nomination period on 12 July last?

“I trust that as president, you had no part in the decision to hold such a rapid process, a process that resulted in you yourself being re-elected unopposed.

“I’m sure you would agree that five days is a very short period for candidates to submit their nomination papers. Given that you were unopposed and the number of qualifying candidates was restricted to fifty existing FAI Council members, all with a minimum of two years’ service, in the circumstances, I believe it would be worth extending the deadline to accept nominations at least until the end of this week and from beyond the ranks of council members.”

Mr Ross also queried if the FAI was responding in a full and timely manner to requests for information from Sport Ireland after giving commitments to do so.

“Were they kept up to date with the details and timing of the elections for president and vice president,” he asked.

He also said a motion tabled to reduce the quorum for the FAI board from six to two “beggars belief”.

“It is difficult to understand how a board of 12 could have a quorum of just two members. I believe Sport Ireland have sought clarification around this point and I would appreciate it if you would also explain to me why this amendment has been proposed and how it is in line with good governance principles to apply a quorum of just two board members?” he said.

Mr Ross said he appreciated the recent work Mr Conway had done including the roadshows put on by the organisation.

However he said Mr Conway had “to withdraw your nomination for re-election at the upcoming AGM to allow for new leadership with credible reform credentials, in the best interests of football”.

In a statement on Tuesday night the board of the FAI and Mr Conway said the current board will, as indicated previously, stand down at the AGM on July 27th and “remains fully committed to governance reform”.

It said the report from the independent governance review group, for the FAI board and Sport Ireland, stated that for handover and transition purposes and to manage the serious risks where everyone leaves at once, at least one or possibly a maximum of two members might consider putting themselves forward for positions on the interim board.

All eligible Council members have been aware since the letter to Mr Ross of April 16th - confirming that the current board would step down on July 27th - that elections for these roles would take place on July 27th, it added.

The statement also said that the independent governance review group stated that to be eligible for consideration for the position of president or vice president of the interim board, a nominee should be a serving member of Council and have at least two years Council membership experience.

It further stated it noted the Minister’s “ongoing interest in and concern for the game of Association Football and shares the Minister’s desire to improve governance all across the association. The board and executive remain in regular contact with Sport Ireland and have met with them on a number of occasions, as recently as today and last Friday. The board will consider the Minister’s letter in full at its next meeting”.

The FAI has been beset by controversy since it emerged earlier this year that former chief executive John Delaney gave the association a €100,000 loan in 2017 after it faced a cash flow crisis.

Two major investigations are underway into governance and finances in the FAI, one by Mazars, the other by the Office of the Director of Corporate Enforcement.

The FAI confirmed on Monday that Mr Conway, a director of the association since 2005, has been nominated unopposed to the presidency for the coming year.

Mr Conway had made known his intention to run again despite the clearly stated preference of Mr Ross, that he and all of the other current board members depart. The retired schoolteacher has made it clear that despite having been on the board for almost the entirety of John Delaney’s decade and a half as chief executive, he believes he is the right person to deliver the proposed reform.