Victims ‘feel they are retraumatised and effectively victim-shamed,’ Minister says 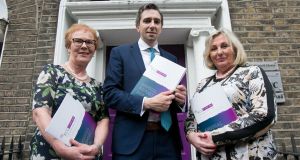 Minister for Health Simon Harris has said he is “ashamed” of the way rape trials are carried out in this country.

Mr Harris was speaking at the launch of the 2018 annual report of the Dublin Rape Crisis Centre (DRCC) on Tuesday.

He said the way in which rape trials are conducted must change to ensure more people came forward and reported incidents of sexual violence.

“We must ensure that victims of sexual violence do not fear the criminal justice system. We must legislate to adapt for the ever-changing realities of sexual abuse,” he said.

“I don’t think anybody in our country could be satisfied with how rape trials are conducted. I am not satisfied. I am quite frankly ashamed as a citizen of this country.”

“Protecting victims in our judicial system is really, really important, and I’ve heard of far too many rape victims, or victims of sexual assault who feel they are retraumatised and feel they are effectively victim-shamed.”

The DRCC report showed there was a 65 per cent increase in demand for crisis services between 2016 and 2018.