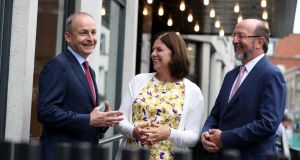 Fianna Fáil leader Michael Martin has called for the creation of a department of higher education and research that would be separate from the Department of Education.

Mr Martin said his party in government would seek a “broader reconfiguration” of the departments as there was not “enough thought” put into the structures of some of those established in recent times.

The Cork South Central TD said the Department of Children and Youth Affairs and Department of Rural and Community Development got off to “a very difficult start”.

“Because of the packed agenda within education at the moment, from a policy perspective, higher education tends to get marginalised in the wider debate of primary, second level, special needs education, curriculum reform and all of that,” he added.

The Government is due to announce proposed legislation in the coming days that will introduce a series of penalties for third-level colleges for misconduct.

“I think it [higher education<DD>)] needs a re-energised agenda in terms of both investment but also freedom, a bit more flexibility. There is too much reaching in and what the Government tend to be doing . . . they’re politicising some funding schemes and saying here’s a special fund separate to the normal funding systems,” he said.

“There’s a lot of what we might call shadowboxing going on and PR stuff but a lack of substance behind that.”

He said higher education and research is under “real pressure”, which is likely to get “much, much worse in the next decade unless we start acting now”.

“The creation of a separate department of higher education and research might be the only way to guarantee both the real priority for this area and to provide strategic leadership,” he said.

“Such a department would have critical mass in terms of size and budget and would mean that for the first time we will have a senior political and administrative leadership, whose sole responsibility would be to focus on higher education and the wider research and knowledge agenda.”

Mr Martin said he is absolutely opposed to the current “political attempt” to bring Ministers and Government departments “back into the decision making structures for research awards”.

“Last year’s National Development Plan is full of proposals such as the disruptive technologies programme which allow Ministers the final say and bypass awards procedures which has so consistently worked in the past,” he said.