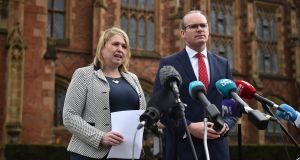 Northern Ireland secretary of state Karen Bradley and Tánaiste Simon Coveney hold a press conference as they attend an event to mark the 20th anniversary of the Belfast Agreement at Queens University in Belfast, Northern Ireland. Photograph: Charles McQuillan/Getty Images

Strains between the Irish and British governments over Brexit were evident yesterday, as former leaders gathered to commemorate the signing of the Belfast Agreement 20 years ago.

However, there were sharp exchanges between Dublin and London after British Brexit secretary David Davis suggested the Government’s approach to Brexit was being strongly influenced by Sinn Féin.

The charge was strongly rebuffed by Taoiseach Leo Varadkar and Minister for Foreign Affairs Simon Coveney. Mr Varadkar called the comments “strange” and “inaccurate”, while Mr Coveney said they were “nonsense”.

Mr Ahern came to the defence of the Fine Gael-led minority Government.

Speaking at the ‘Building Peace’ conference in Queen’s University, Belfast, Mr Ahern said Mr Davis seemed to be implying that Mr Varadkar was a “card-carrying member of Sinn Féin” when he claimed Ireland’s Brexit stance was being influenced by the party.

A number of speakers at the event voiced serious concern about the effect Brexit will have on relations between Dublin, London and Belfast.

Mr Davis told a conference in London he had not anticipated the tough approach to negotiations taken by Mr Varadkar, who took over as Taoiseach last June. “We had a change of government, south of the Border, and with quite a strong influence from Sinn Féin, and that had an impact in terms of the approach,” Mr Davis.

Mr Ahern said: “I don’t see the purpose in trying to attack the Taoiseach. If the implication was, which it seemed to be, that the Taoiseach was a card-carrying member of Sinn Féin . . . I don’t get that.”

He had been asked if Mr Davis’s comments showed that the relationship between Dublin and London has deteriorated significantly.

Mr Ahern said the effect of British and Irish politicians and officials no longer working together at EU level after Brexit has been given insufficient attention. “We had a great relationship. The Irish government, the British government, others had before us and after us as well.”

Jonathan Powell, who served as chief of staff to Mr Blair and was a key figure in the Belfast Agreement talks, said Mr Davis’s intervention was “extremely unwise”, particularly when the UK needs a Brexit deal by October.

He said it was “extremely unwise” to insult your opposite numbers in negotiations when an outcome needs to be agreed by October if Britain wants “a legally binding divorce agreement from the EU”.

Also at the conference, former Northern Ireland deputy first minister Seamus Mallon said nationalists must be able to persuade unionists that Irish unity will be a good thing, without making them afraid of constitutional change.

“I want to be able to persuade unionism that Irish unity would be a good thing for us and them. I can’t do that if there are afraid. If they can’t breathe, if this threat is always there, sometimes openly and sometimes not, that they don’t belong here,” Mr Mallon said

At earlier press conferences, he criticised some for using Brexit to push for a referendum on Irish unity that would be settled by a narrow majority.