Government looks to push closer German ties ahead of Brexit 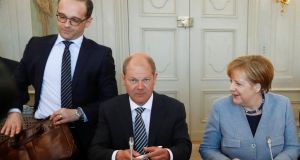 The plan is expected to involve a new consulate in Frankfurt, a joint Irish-German economic council, closer political and ministerial exchanges and a greater arts push co-ordinated by a new cultural director in Berlin.

The Irish Embassy in Berlin has since December been consulting on proposals to boost Ireland’s profile in Germany ahead of Brexit and next year’s 90th anniversary of the first Irish diplomatic mission to the country.

Bedded down in the Government’s wider plan to double Ireland’s global footprint by 2025, proposals raised during German consultations include an award recognising people who contribute to Irish-German relations and greater outreach to emigrant Irish families and second- and third-generation Irish.

The Department of Foreign Affairs plan is an attempt to adapt to new post-Brexit realities but also to catch up with Irish people voting with their feet. In the six years to 2016, the Irish community in Germany grew by 40 per cent to 14,000 and continues to expand.

The plan is likely to make clear that a reboot of Irish relations must engage closely with Angela Merkel’s federal government but also with the decentralised Germany beyond Berlin: 16 federal states, many with populations and economies dwarfing most EU members, which have huge autonomy in everything from investment to education policy.

It is expected to propose regular German visits by Irish officials to co-ordinate bilateral and EU policy.

Closer ties will hinge on Irish officials identifying and implementing useful projects with Germany – from cybersecurity co-operation to arms control and development co-operation in Africa.

A key factor in realising the policy review is funding. An embassy survey flagged culture as the single most visible platform for Ireland in Germany. Yet, even as Ireland’s economy recovers, its annual cultural spend in Germany is a quarter that of Denmark and a fifth of Finland’s, two similarly sized countries.

While those countries have dedicated cultural spaces, the report is likely to recommend rebranding the existing Embassy space as an “Ireland House” for cultural events.

Frankfurt has emerged as the likely home of a new permanent consulate, given it is home to the European Central Bank, major European banks, the IDA and Tourism Ireland.

The plan also underlines how selling Ireland, its products and services to Germany cannot happen unless those doing so speak German. With that in mind, the plan identifies a need for a new German language-learning push in Ireland and renewal of German-Irish education links.

German officials have welcomed Ireland’s strategic review as timely. Mr Maas will use his first visit to Dublin – before heading on to London – to underline Berlin’s backing for Ireland’s Brexit position.

Berlin officials see the Republic as a litmus test for Brexit: if it can be made work with minimum disruption on the island, it will work for the EU27.

While Mr Maas is in Dublin, Minister for Finance Paschal Donohoe will hold his first meeting in Berlin with his German counterpart Olaf Scholz. As well as discussing post-Brexit EU budget planning, Mr Donohoe will sound out the Social Democrat minister on whether to expect continuity or change from Berlin on the EU tax debate which, in Germany, has focused on Ireland.