‘There must be more of us out there. We must know each other’

Through the 1970s some 15,259 women gave Irish addresses at British abortion clinics

The biggest shock for Anne Conway (69) when being admitted to an abortion clinic in London in 1970 was being greeted by an Irish nurse: “We see a lot of Irish girls here”. Video: Kitty Holland, Kathleen Harris 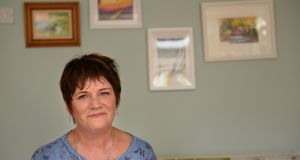 Anne Conway, at home in Donnycarney, Dublin, had an abortion in 1970. Photograph: Dara Mac Dónaill / The Irish Times

The biggest shock for Anne Conway (69), when being admitted to an abortion clinic in the UK almost 50 years ago, was being greeted by an Irish nurse: “We see a lot of Irish girls here.”

“Although 48 years have passed it feels like the atmosphere has not changed – the fear, the judgment, the stigma. I’ve never told anyone about my abortion, just my husband and adult daughters. I regret that. I decided to speak about it now to try to change that stigma. It has to stop.”

Through the 1970s some 15,259 women gave Irish addresses at British abortion clinics.

Anne gave an address in London, saying she would have been “terrified” her family would find out if she gave her address in rural Cavan.

She had become pregnant while living in Dublin – contraception was illegal – but found out when she was working with a friend as a chambermaid in Austria. “I told a doctor there I didn’t want to be pregnant, I couldn’t. I felt this was something I wasn’t going to be able to cope with. I felt I’d never be able to go home, that I’d be cut off from my family, a single mother, in poverty.

“And I wanted a life. One thing I remember my mother saying to me was, ‘Go away and have a life.’ Life was very hard for women then and she didn’t want that for me . . . It would have broken her heart.”

Abortion remained illegal in Austria until 1975, but the doctor gave her contact details for a doctor at Guy’s Hospital in London.

“I left my friend in Austria, got a train to Germany and from there hitched to England. It was very lonely. It wasn’t nice to hitch alone when you’re not feeling well. I’ve never thought about that since but it was hard.

“I stayed with some relatives in London but I was so nervous about my secret being found out, I moved to a hostel in north London.” She got work in an office by day and at a pub by night.

She was told at Guy’s she would have to go to a private abortion clinic – she thinks this is because, being Irish, she couldn’t have an NHS abortion. It would cost about £100 (about €1,600 today).

In desperation, she confided in a barmaid where she worked, who told her she could “take a bottle” of a substance which, she was told, would “bring on a period”.

“I thought it could work, that I wouldn’t have to get the money, but I started drinking it and I felt myself boiling up inside. I thought, this could kill me. I thought then as well that I could have damaged the baby. I couldn’t have it.

“I wandered around Harley Street, looking at brass plates on the walls, wondering, where do I knock. I found a clinic myself, and then I had to get the money.”

Her former boyfriend supported her decision and agreed to help her. “It was hard for him to get that money together because he was just an ordinary guy, but he did send me money, and I was thankful, very thankful.

“I was really nervous the day of the procedure. I was about 14 weeks at this stage. The biggest shock was being admitted by an Irish nurse. I was terrified someone would recognise me. She [the nurse] said, ‘We see a lot of Irish girls.’ I had a D&C [dilation and curettage where the contents of the womb are removed].

“Once I came to I was just so relieved to be bleeding. I took a bus back to the hostel that evening; I signed myself out. I just remember passing through Camden town and feeling relieved, and all I could think was I have my life back.”

Anne went on to study nursing and returned to Ireland when she was 27. She is married and has two adult daughters who work with children with special needs.

“I am a bit nervous talking about this now. The thing that motivated me in the end was the silence. I am almost 70 and I don’t know of anyone who had an abortion. But that can’t be right, if 170,000 Irish women have travelled since 1983.

“There must be more of us out there. We must know each other. There must be some on my road, where I live, in the parish where I came from, but I don’t know them. It’s time to actually say something, speak up and say it’s not a terrible thing to do.”