A united Ireland would be a ‘different state’, Leo Varadkar warns 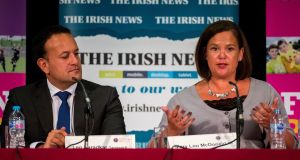 People calling for a united Ireland must realise it would involve a “different state” with a “new constitution”, Taoiseach Leo Varadkar has told an audience in Belfast.

Speaking during the West Belfast Féile an Phobail leaders’ debate, Mr Varadkar insisted now was not the time to push for a Border poll on a united Ireland despite coming under pressure on the issue from fellow participant Mary Lou McDonald, the Sinn Féin president.

She said that a no-deal Brexit must lead to a poll on Irish unity.

However, Mr Varadkar said in the context of Brexit and in the absence of powersharing at Stormont, a Border poll would be divisive and could be defeated.

He said it should be realised that were a united Ireland to happen, it would involve Ireland being a “different state” and considering matters such as Irish being the first official language it would require a “new constitution”.

The Taoiseach also expressed concern about what might happen if such a poll was carried in favour of unity by a narrow margin.

“I think it would result in some of the mistakes being repeated 100 years ago at the time of partition, just the other way around, with unionists being brought into united Ireland against their will,” he said.

As well as a Border poll, the debate also touched on Brexit and restoring the Northern Executive and Assembly.

Speakers were asked who they felt was to blame for the Brexit uncertainty and Mr Varadkar said he was “keen not to play the blame game”, a sentiment with which Mr Campbell agreed. Ms Long, however, was happy to blame UK prime minister Boris Johnson, his predecessor Theresa May and most particularly former prime minister David Cameron for calling the 2016 referendum.

Asked about the security of the DUP’s confidence-and-supply agreement with the Tories, Mr Campbell replied: “I don’t have to trust Boris and Boris doesn’t have to trust us. But what we do have to do is business with each other. The business that we do brings benefit to every single person in this room.”

Mr Campbell, to some barracking from the crowd, said it should be remembered that it was Sinn Féin which brought down the Northern Executive and Assembly in January 2017.

“We didn’t bring it down,” he said emphatically a number of times.

He added that despite his “curry my yogurt” remarks, in the Northern Ireland Assembly in 2014, which he said was a response to Sinn Féin “abuse” of the Irish language, he did “cherish” the language.

Mr Campbell repeated that the DUP had no preconditions to see Stormont reinstated.

“Progress has been made in the talks, more can be made, but it has to be concluded, it is frustrating,” said Mr Campbell.

The Taoiseach also said that the current negotiations involving the British and Irish governments and the North’s five main parties could still succeed.

Debate chairman and BBC broadcaster William Crawley asked participants who on the panel they most admired.

Mr Campbell lived up to his role as the pantomime villain by looking down the panel and asking was there anyone he could nominate.