Minister has ‘no plans’ to legislate over bicycle insurance 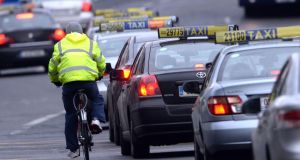 Minister for Transport Shane Ross said there were mechanisms in place to cover liability of cyclists ‘although they may indeed not prove adequate in all cases’. Photograph: Cyril Byrne

Minister for Transport Shane Ross has said he has no plans “at this time” to introduce legislation requiring cyclists to insure their bicycles so they would be covered in the event of them being involved in a collision.

Mr Ross said while it would “theoretically” be possible to require insurance be in place for bicycles, it would involve “a number of significant additional legal and indeed cultural changes”.

The Minister was referring to insurance that would cover damages as a result of collisions caused by cyclists. Mr Ross said the move would necessitate licence plates to enable identification of bicycles, and possibly a licensing system in order to identify riders as opposed to owners.

The Minister’s comments were made in correspondence released to The Irish Times under the Freedom of Information (FOI) Act. Mr Ross was responding to a member of the public in May who suggested cyclists insure their bicycle after a colleague suffered injuries following a collision with a cyclist.

The member of the public wrote: “Notwithstanding that there may be a legal remedy in tort for such pedestrians, the absence of an insurance regime means that the injured party may find themselves seeking damages from a cyclist who does not have the reserves to meet the value of the claim, and seen from the other perspective, a cyclist could find themselves being pursued through the courts by aggrieved injured plaintiffs, with their personal assets including the family home at stake.”

Mr Ross noted there were mechanisms already in place to cover liability of cyclists “although they may indeed not prove adequate in all cases”.

“There are specific offences applicable to cyclists under road traffic legislation, including cycling without reasonable consideration,” he added. “Enforcement of road traffic law is a matter for An Garda Síochána. ”

The Department of Transport said it had nothing further to add when contacted by The Irish Times.

Dr Paul Corcoran, chairperson of Dublin Cycling Campaign, said it would not be pushing for legislation requiring cyclists to insure their bicycles and that collisions between pedestrians and cyclists are “quite rare”.

“Sporting bodies and large cycling organisations like Cycling Ireland, in order to register, part of your registration fee goes towards your insurance but they’re more high-risk events,” he said.

In January 2018 a pedestrian who sued a teenage cyclist over injuries suffered when he was knocked down by the boy’s bike on a footpath in Raheny, Dublin, conditionally settled his High Court action. While details of the agreement between the sides were not disclosed, it is understood it involves a financial payment.

The court heard the injured party was 66 when the incident happened and he suffered a hip fracture as a result.