What Boris Johnson said about Ireland in his first speech

‘I am convinced that we can do a deal without checks at the Irish border,’ says new PM 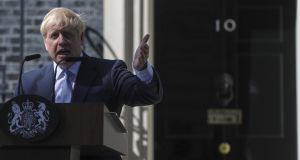 Boris Johnson delivering his inaugural speech as UK prime minister on Wednesday. “The doubters, the doomsters, the gloomsters – they are going to get it wrong again.” Photograph: Simon Dawson/Bloomberg

Boris Johnson took over as Britain’s prime minister on Wednesday, succeeding Theresa May with a promise to take the country out of the European Union on October 31st, “no ifs or buts”.

This is what he said about Brexit and Ireland in the speech he gave outside his official Downing Street residence in central London:

“Good afternoon. I have just been to see Her Majesty the Queen who has invited me to form a government and I have accepted. [...]

“The doubters, the doomsters, the gloomsters – they are going to get it wrong again. The people who bet against Britain are going to lose their shirts because we are going to restore trust in our democracy and we are going to fulfil the repeated promises of parliament to the people and come out of the EU on October 31 no ifs or buts. And we will do a new deal, a better deal that will maximise the opportunities of Brexit while allowing us to develop a new and exciting partnership with the rest of Europe based on free trade and mutual support.

“I have every confidence that in 99 days’ time we will have cracked it. But you know what – we aren’t going to wait 99 days because the British people have had enough of waiting [...]

“ And though I am today building a great team of men and women, I will take personal responsibility for the change I want to see. Never mind the backstop – the buck stops here. [...]

“And that is why we will come out of the EU on October 31 because in the end Brexit was a fundamental decision by the British people, that they wanted their laws made by people that they can elect and they can remove from office and we must now respect that decision and create a new partnership with our European friends – as warm and as close and as affectionate as possible.

“And the first step is to repeat unequivocally our guarantee to the 3.2 million EU nationals now living and working among us and I say directly to you - thank you for your contribution to our society, thank you for your patience and I can assure you that under this government you will get the absolute certainty of the rights to live and remain.

‘Our friends in Ireland’

“And next I say to our friends in Ireland, and in Brussels and around the EU: I am convinced that we can do a deal without checks at the Irish border, because we refuse under any circumstances to have such checks, and yet without that anti-democratic backstop and it is of course vital at the same time that we prepare for the remote possibility that Brussels refuses any further to negotiate and we are forced to come out with no deal not because we want that outcome, of course not, but because it is only common sense to prepare.

“And let me stress that there is a vital sense in which those preparations cannot be wasted and that is because under any circumstances we will need to get ready at some point in the near future to come out of the EU customs union and out of regulatory control fully determined at last to take advantage of Brexit because that is the course on which this country is now set with high hearts and growing confidence we will now accelerate the work of getting ready.

“And don’t forget that in the event of a no deal outcome we will have the extra lubrication of the £39 billion and whatever deal we do we will prepare this autumn for an economic package to boost British business and to lengthen this country’s lead as the number one destination in this continent for overseas investment.

“And to all those who continue to prophesy disaster I say yes – there will be difficulties, though I believe that with energy and application they will be far less serious than some have claimed.[...]

“And as we prepare for a post-Brexit future it is time we looked not at the risks but at the opportunities that are upon us.” – Reuters