Taoiseach’s intentions remain unclear, but pressure is building within both parties

An Taoiseach Leo Varadkar gave little away in response to questions on the general election date when he spoke to media ahead of a meeting of the Fine Gael parliamentary party in Dublin. Video: John Cassidy 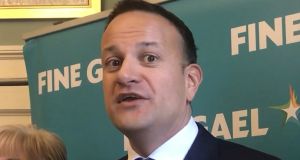 Walking back from his meeting with Leo Varadkar on Thursday evening through the corridors that run from Government Buildings to Leinster House, Micheál Martin shared a joke with his chef de cabinet, Deirdre Gillane.

The sound of laughter carried further than usual because of the funereal silence. With the Oireachtas not scheduled to resume after Christmas until next Wednesday, few were around the Dáil. Fewer still were there after 7pm.

Some of those TDs who did travel to Leinster House this week emptied their offices in anticipation of an impending election. Others confessed to weighing up whether they will actually run again or instead retire.

Martin was relaxed as he returned to his office. Neither he nor Varadkar carried the air of wrestling with a decision. Meanwhile, their TDs became increasingly convinced as the week wore on that a February election is likely.

However, the meeting itself had been inconclusive. Both men outlined their positions on wrapping up the confidence and supply agreement which sees Fianna Fáil underpin the Fine Gael-led minority government.

Martin is understood to have told colleagues afterwards that he could not read Varadkar’s intentions – which was probably exactly what the Taoiseach wanted. They will meet again next week.

Varadkar wants a Martin guarantee of actual support for the Government – instead of just abstaining – on some Dáil votes and his backing for a number of policies, including property tax reform, in exchange for an agreed election date.

The demand is politically impossible for Martin to accept, perhaps intentionally so, although both Varadkar and Martin say an agreed list of legislation can be passed before voters are asked to go to the polls.

Rural Independents will put down a no-confidence motion against Minister for Health Simon Harris in early February, putting further pressure on Varadkar. More likely, Varadkar will seek a dissolution of the Dáil on his own terms and without any agreement with Fianna Fáil.

Varadkar, however, has given little away in private. Ministers have attempted to second-guess his intentions from conversations with him, whilst also trying to figure out if any of their Cabinet colleagues knew more than they do.

Speaking after the Cabinet meeting in Marino this week, one senior figure said their fear that they were out of the loop was assuaged by the fact that others were clearly just as clueless about the Taoiseach’s plans.

TDs asked after the whereabouts of President Michael D. Higgins, should a visit to the Park be necessary The President, as it happens, was on a short holiday break, returning to Ireland on Saturday. Ministers, like all others, were instead left to look for hints that the ground is being readied for an election – such as the tweaking of election tickets and the announcement on Friday of €77 million in sports grants for larger infrastructural projects.

In some instances, more cash was found over and above the official sports grants list. Connacht Rugby was unhappy that it was getting €10 million for its stadium, not €20 million. Pressure was exercised. The extra €10 million was found just minutes before the grants were announced.

Thoughts have already turned to the campaign to come. A presidential Leo-versus-Micheál-style contest will suit both. Fianna Fáil and Fine Gael TDs welcomed the news that both will take part in a head-to-head debate, believing that will help squeeze support for smaller parties.

For now, people in Fine Gael and Fianna Fáil believe they are neck and neck. Advantage will be hard won, though this week’s Royal Irish Constabulary controversy has been a gift for Fianna Fáil, and left Fine Gael TDs trying to explain that they would not commemorate the Black and Tans.

Though they enjoyed Fine Gael’s discomfort immensely, Fianna Fáil TDs do not think it will decide voters’ minds on polling day. “It was the best thing in three years for geeing up our grassroots,” said one frontbench member.

Fianna Fáil TDs, like their members, are eager to be let off the leash to attack Fine Gael after years of keeping it in office. “This is a choice: either them or us,” said one TD, although it will not be so simple.

Fine Gael and Fianna Fáil are unlikely to poll above a combined 60 per cent, with Sinn Féin, Labour, the Greens (seen as a particular threat to Fine Gael in middle-class areas) and others competing for votes and seats.

In response to Fine Gael claims that Fianna Fáil is lacking in serious policy, senior figures in Martin’s party say they will only launch their policy offering during the election campaign proper.

Those in Government believe a short campaign is too late to land policies and say voters need to be introduced to new proposals over months, not days.

“They aren’t Apple – it isn’t launching an iPhone,” said one source, adding that Fianna Fáil has yet to outline why voters should actually support Martin, instead of just rejecting Varadkar.

The voices of caution in Fine Gael, who believe Varadkar should hold on until the spring before going to the polls, point to hospital waiting lists and the difficulties associated with a winter election, such as recruiting canvassers on cold nights.

Fine Gaelers have long compared the coming contest to the 2007 election, when what was believed to be an unpopular Fianna Fáil-led government held on for a third term after a late campaign swing.

“If we were to believe the top-of-the-head brigade, the election will be about how s**t everything is,” remarked one Government figure, before pointing towards the strength of the economy and the Government’s handling of Brexit.

“When [the] election is actually a reality, public opinion will reset,” said one senior Fine Gael figure. “That can go for you or against you.”

A senior Fianna Fáiler countered that “it’s not always about the economy”, with a belief in the party that the main battlegrounds will be housing and health.

The winning and losing of the election may be in defining the ground on which it is fought. Fine Gaelers tell themselves that, just as in 2007, the swing back to the Government may not come until the final week of the campaign.

If the danger of a winter election lies in overcrowded hospitals, then the benefit is in Brexit.

Fine Gael is already emphasising its Brexit team of Varadkar, Simon Coveney and Helen McEntee, and Varadkar has warned that Boris Johnson may pursue a hard Brexit.

A potential Johnson-Varadkar meeting in Belfast to mark the restoration of Stormont is mooted in Fine Gael circles, and European Commission president Ursula von der Leyen will also visit Dublin next week.

If an election is called in the coming days, Brexit could frame the beginning of the election, as well as the end.

A polling day of February 7th or 14th would see Brexit actually take place in the final, crucial weeks of a campaign, with Britain leaving the EU on January 31st.

But against all the noise, supposition, conjecture and debate, the choice – to go now, or wait until spring – is Varadkar’s alone.