One employee wrote: ‘This airplane is designed by clowns, who are in turn supervised by monkeys’ 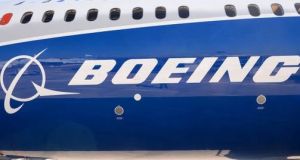 Boeing said “some of the sentiments” expressed in the messages did not match the company’s values. Photograph: Getty Images

Boeing employees mocked federal rules, talked about deceiving regulators and joked about potential flaws in its Boeing 737 Max as it was being developed, according to confidential messages delivered to US Congress investigators.

Faced with ever-mounting criticism, the company expressed regret at the embarrassing communications, including one that said: “This airplane is designed by clowns, who are in turn supervised by monkeys.”

Two Boeing 737 Max aircraft crashed in five months over 2018 and 2019, killing 346 people – including Lahinch, Co Clare-born Michael Ryan – which has resulted in a worldwide grounding order.

The messages are highly embarrassing for the Seattle-based firm, which has already lost its chief executive, Dennis Muilenburg, and faces the prospect of multibillion dollar fines and compensation claims.

In one 2018 email, suggesting that employees concealed problems with simulator training machines from the Federal Aviation Authority (FAA), an employee said: “I still haven’t been forgiven by God for the covering up I did last year.”

In another exchange between employees before the crashes occurred, an employee said: Would you put your family on a Max simulator trained aircraft? I wouldn’t.”

“No,” a colleague responded.

In a third, employees questioned the design of the Max, and even denigrated their own colleagues in exchanges during the course of 2017. “This airplane is designed by clowns, who are in turn supervised by monkeys,” wrote one.

In a fourth, an employee warned in March 2018 that he would not lie to the FAA , saying: “Will leave that to people who have no integrity.”

Replying, a superior said: “I’m sorry, that is not acceptable. Your integrity is priority 4.”

Peter DeFazio, the Democratic chairman of the House committee on transportation and infrastructure, said: “These newly released emails are incredibly damning. They paint a deeply disturbing picture of the lengths Boeing was apparently willing to go to in order to evade scrutiny from regulators, flight crews and the flying public, even as its own employees were sounding alarms internally.”

Responding, Boeing said “some of the sentiments” expressed in the messages did not match the company’s values. “This will ultimately include disciplinary or other personnel action once the necessary reviews are completed.”

On Tuesday, Boeing finally recommended simulator training for 737 Max pilots instead of relying on software programmes. Simulator training costs hundreds of dollars per hour and can dissuade airlines from buying certain aircraft.

1 Midlands lockdown: Movement restrictions in place for residents of Kildare, Laois and Offaly
2 Masks Q&A: Who has to wear them in shops and what happens if you don’t?
3 Midlands lockdown could extend to other areas, warns Covid-19 team
4 Meat plant clusters may be down to softly-softly approach
5 ‘Draconian’: TDs from across Midlands shocked and angered over lockdown
Real news has value SUBSCRIBE