Northern parties to return to Stormont on Saturday 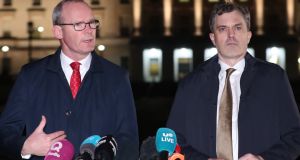 The Northern parties, on the back of the British and Irish governments’ New Decade, New Approach proposals, are due at Stormont at lunchtime on Saturday to re-establish the Northern Executive and Assembly.

Three years after the collapse of the powersharing institutions, the North’s two main parties, the DUP and Sinn Féin, gave their backing to the British and Irish governments’ deal, paving the way for the restoration of Stormont.

On Friday evening, Sinn Féin’s Ard Comhairle took the decision to re-enter the power-sharing institutions and nominate ministers to the power-sharing Executive in Northern Ireland, the party’s president Mary Lou McDonald told reporters at a press conference in Parliament Buildings. The SDLP and Alliance Party have also decided to support the deal to restore powersharing.

Ms McDonald said that it was the “responsibility of every party to ensure the Executive meets”and was “anxious we get to work as soon as possible”.

Ms McDonald saidthe party was “ready to do business” , to go back into the Executive and to make its nominations for first and deputy-first ministers, “on the basis that now we rebuild complete power-sharing”.

She said she believed all of the North’s parties should now enter the Executive.

The SDLP leader Colum Eastwood also said he did not believe there was any reason that the Assembly should not sit tonight.

He said the party was re-entering the Executive “probably sceptically” but that it has taken the decision to “make sure we can deliver for the people we are concerned about” and that it would hold other parties to account.

Ms McDonald told reporters she believed “the changes which have been achieved in the negotiations over the last year build on what was agreed in February 2018, and involve some very significant advances.”

These included, she said, “an Acht Gaeilge with official, legal recognition of the Irish language for the first time, an Irish language Commissioner and increased Irish language funding,” as well as the reform of the petition of concern “to try and end its misuse as a veto by one party” and “key measures to ensure transparency and accountability, to prevent corruption and bad practice and to implement the recommendations arising from the RHI [Renewable Heating Initiative] Inquiry.”

But, referring the proposal to increase by three the number of days the Union flag would be flown over government buildings and courthouses in Northern Ireland, she said she rejected “in the strongest possible terms the British government commitments to the DUP on flags and other issues.”

“These are not part of this agreement,” she said. “Indeed they fly in the face of the Good Friday [Belfast] Agreement and are bad faith. It is disappointing that the Irish Government acquiesced to these measures.”

However Ms McDonald said there was now a basis to restore power-sharing. “There is no doubt there are serious challenges ahead – the impact of Brexit, austerity and a range of other issues.

“The biggest and most significant challenge will be ensuring that we have genuine power sharing based on equality, respect and integrity.

“I believe that the power-sharing government can work. That requires everyone to step up. Sinn Féin’s commitment is to do all in our power to make this happen,” she said. “Three years ago Martin McGuinness set down a challenge to all of us to get it right and to deliver for all. We now need to get to work.”

The Democratic Unionist Party was the first to react to the publication of the draft text on Thursday night, with the leader Arlene Foster issuing a statement shortly afterwards.

“On balance,” she said, “we believe there is a basis upon which the Assembly and Executive can be re-established in a fair and balanced way.”

The Ulster Unionist Party (UUP) were due to hold meetings today.

The UUP leader Steve Aiken said his party would “consider this complex and far-reaching document carefully and consult widely within our party before making any further comments”.

“If the Assembly is recalled on Friday, the Ulster Unionist Party MLAs will attend and consider the business put before them,” he said.

The Tánaiste and Minister for Foreign Affairs Simon Coveney said that “history has been made today”.

He said it may be possible to form the Executive tomorrow.

“It has been a difficult process for many parties. But this now looks like it is coming to a successful conclusion. And what is most important about is that the people of Northern Ireland will have a government again. They will have political leaders that can make decisions for them that can work for them and they will no longer have to rely on a really, an unacceptable lack of governance, where civil servants have to make decisions.

“But we do have to wait and give the time and space to the remaining parties who have to publicly declare positions in relation to being part of an executive in Northern Ireland.

“ I think the hope is to be able to move this process forward now and to build on the momentum that’s been created in the last 24 hours so that people can see positive political activity, parties working together, political leaders working together, setting an example and sending a signal of positivity that politics in Northern Ireland can be a force for good.

“It is a good day. I think it is time to to recognise that something substantial, significant and positive is happening on our island.”

The Irish and British governments published a draft text on Thursday night which would form the basis for the restoration of the Northern Executive.

Earlier on Friday, Taoiseach Leo Varadkar said the talks process was “at a very sensitive point” .

“ I think there is a real chance that today or if not by Monday, we can have the Northern Ireland Assembly and Executive back up and running again,” Mr Varadkar told reporters at a Fine Gael event in Dublin on Friday.

“I’d really appeal to all of the parties now to sign up to the agreement, to come on board, to have the assembly meeting again, to have the Executive up and running and crucially to have the North-South ministerial Council, operating again, so we can press ahead with those really important North-South cross-Border projects.” Additional reporting - PA