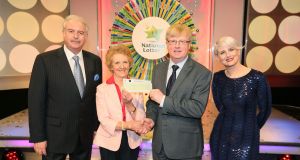 An 83-year-old shoe shop owner from Co Monaghan will make National Lottery history this weekend when she becomes the first person to appear on its cash-rich TV programme Winning Streak for the third time.

Few people are fortunate enough to appear on the show even once but Rose Anne Shankey from Carrickmacross could scarcely believe her outrageous fortune when her name was pulled out of the drum last weekend securing her third appearance.

Known as Nancy to her nearest and dearest, she was watching Winning Streak last Saturday night as is her custom and was flabbergasted when she saw her name being selected to appear on this Saturday’s show.

She said even though it was her third time to watch her name be drawn “nothing prepares you for the shock and excitement at the same time”.

When she appeared on the show presented by Marty Whelan and Sinéad Kennedy in December 2013, she got to spin the Grand Prize Wheel and won a total of €91,400.

She will be hoping it is third time really, really lucky and that she gets to spin the wheel again with a chance of winning up to €500,000.

An extra segment of €100,000 has been added to the wheel every show for this new series, improving players chances to win a massive prize.