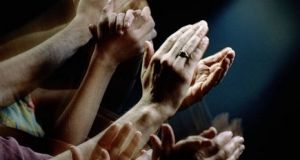 Traditional clapping and whooping can pose an issue for students with autism and other conditions. Photograph: Getty

Students at Manchester University, one of the biggest universities in the United Kingdom, have voted to ban clapping, whooping and cheering at student union gatherings in a bid to help those with anxiety and sensory issues.

Jazz hands – a gesture where hands are waved rapidly to and fro with the palms facing forward and the fingers splayed to express excitement or triumph – will be used instead.

The decision was taken at a meeting last week of Manchester University’s student union, where students “resolved to swap out audible clapping” for “jazz hands”, which is recommended by the British Sign Language organisation.

The student union will now encourage student groups and societies to do the same as part of inclusion training, said the union’s Liberation and Access Officer Sara Khan, who authored the motion.

The loud noise that comes with traditional clapping and whooping poses an issue for students with autism and other conditions, the meeting was told.

Motions need a two-thirds majority but little opposition was expressed.

Jazz hands have been used at meetings of the United Kingdom’s National Union of Students for three years, while students at the University of Durham this year argued that cheering and whooping should be banned, too.

Such behaviour causes “clap-based anxiety” among some people with disabilities, the Durham students argued, although others argued later that jazz hands discriminates against the blind.