Lost Leads, 1803: A bloody legend of greed, treachery and a tell-tale corpse 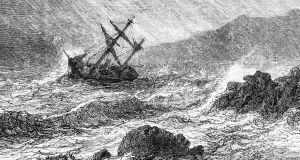 According to the story, some of the cargo of a wrecked ship at Ireland’s Eye was salvaged by people on the coast. Illustration: Thomas Faull/iStock/File photo

Barney Sullivan apparently wasn’t an upstanding character. By the estimation of one Irish Times correspondent, the labourer “existed more by his wits than by honest work.”

In 1931, an unnamed Irish Times writer sought to paint a bloody picture of Ireland’s Eye in a piece about local legends, tall-tales and superstitions attached to the small island off Howth, Co Dublin. The reporter relayed two tragedies; the first, the Kirwan case, is a well-documented murder mystery from 1852 which previously featured in Lost Leads.

The other is a lesser-heard tale, featuring the cunning Sullivan.

“It is curious that the two stories most commonly told of Ireland’s Eye should have their basis in the old superstition that the body of a murdered person will bleed afresh when touched by the murderer,” reads the piece, referring to the concept of cruentation; an archaic mode of crime detection, whereby a murdered corpse was believed to announce the presence of its murderer by bleeding.

According to National Geographic, the practice of using cruentation to assign guilt to a person accused of murder lasted into the early 19th century, which is when this story takes place.

On a winter night in 1803, a ship belonging to the East India Company was wrecked by a storm in the waters surrounding Ireland’s Eye, according to the article. Though there appear to be no direct reports of such a wreck in those waters that year, the National Monuments Service’s Wreck Viewer does identify a number of wrecks of unknown origin in the vicinity.

As the story goes, the incident proved devastating for the passengers and crew; all “perished in the tempestuous seas”. The same, however, wasn’t said of the people living along the coast: “A guard was placed on the ship for a time, but a considerable part of the cargo had floated away, and the fishermen and peasantry of the district reaped a rich harvest in laces, silks, tobacco, and wines, which were found scattered along the coastline.”

After a month or so, the guard was stood down. With the ship about to break up, Sullivan approached a well-to-do farmer who lived near Baldoyle and pitched a salvage mission; there was still plenty to be saved, he said, if carts were brought to the strand at night, when the tide was about to turn. “At first the farmer refused to entertain the idea, but eventually allowed himself to be persuaded, greatly against the advice of his wife,” reads the piece.

At 11pm and under the cover of darkness, four carts and horses set out for the section of the strand where Sullivan said the treasures could be retrieved.

It quickly emerged that Sullivan had miscalculated the timing of the tide and water began to surround the wheels of the carts. The farmer, who couldn’t swim, wished to go back, “but his adviser persuaded him to go on, assuring him that when they reached a high spit of sand a short distance ahead they would have arrived at their goal.”

The other three vehicles turned to escape, but when Sullivan eventually made the decision to abort, the tide was so high that the horse was forced to swim. The labourer mounted the animal’s back and the farmer, lagging behind, held onto his companion’s coat.

“The water rose higher and higher, until Sullivan, seeing that the position was becoming desperate, became anxious for his own skin, and slipped his arms out of the sleeves of his heavy coat, leaving the farmer encumbered with the garment. He then swam for the shore, heedless of the cries of his companion, who was drowned.”

The article doesn’t name the deceased, nor do newspapers at the time seem to have covered a Baldoyle farmer’s drowning around those years. What the article does say, however, is that Sullivan showed up to the farmer’s wake the next day “and explained that he had done all he could to rescue the dead man, but was obliged to abandon him owing to his struggles”.

“At that time it was the custom for everyone present at a wake to lay one hand on the body,” reads the piece. “When Sullivan did so it is alleged that the corpse began to bleed, and the widow immediately accused him of murder and called down a curse to the effect that he might die the same death as her husband. There was no actual proof of the accusation, but Sullivan thought it prudent to leave the district.”

After his exile, Sullivan reportedly began a life of crime in Wexford, heading up a gang of “ruffians” whose record included robbery and murder. All were apprehended but Sullivan, who fled to his native Baldoyle. Officers eventually managed to track him to his hometown, spotting him one night near his former house.

“The hue and cry went forth, and the fugitive, seeing no hope of escape by land, conceived the desperate expedient of swimming to Ireland’s Eye. His strength, however, failed to sustain him in the effort and he was drowned not far from the scene of his former treachery, this fulfilling the widow’s curse.”

1 Aaron Brady, the man who said with pride he was a cop killer
2 Aaron Brady found guilty of capital murder of Det Garda Adrian Donohoe
3 Case of Covid-19 confirmed at community crèche on UCD campus
4 Make a Day of It: Get back into your favourite city centre, Dubs urged
5 A chronicle of dignity and despair
Real news has value SUBSCRIBE