Koalas arrive in UK in bid to protect species from extinction 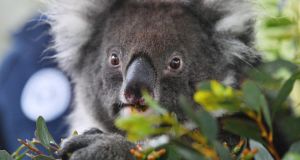 Five southern koalas have arrived at their new home in England after flying 16,000 km (10,000 miles) from Australia.

The iconic marsupials travelled from Cleland wildlife park near Adelaide to Longleat safari park in Wiltshire in the south west of the country in a bid to protect their species.

They were special guests on a Singapore Airlines Cargo aircraft, accompanied by keepers and a veterinary team.

After touching down at Heathrow on Thursday night, the koalas were picked up from the runway and transported to Longleat.

They were given a full health check on arrival and declared fit and well.

Graeme Dick, of Longleat, said: “We’re delighted to announce the arrival of the koalas and wombats here at Longleat.

“All appear in excellent health and are settling in well.

“This is the culmination of a two-year project and the beginning of an exciting new era.

“We hope these animals will act as conservation ambassadors for the species, and promote conservation and education about Australian marsupials.”

The koala was listed as vulnerable to extinction in some parts of Australia in 2012.

The arrival of the koalas is part of an initiative by the Government of South Australia to enhance the management and conservation of the koala.

The project will enable conservation research that will help to protect the koala population in south Australia.

Southern koalas, which have thicker fur and can weigh twice as much as northern koalas, are not an endangered species but are considered to be vulnerable.

Bill Muirhead, agent general of the Government of South Australia, said: “We are thrilled to welcome our South Australian ambassador animals to the UK, these creatures are an integral part of helping us spread the native conservation message.

“The arrival of the first Southern koalas in Europe is now a milestone in the fight to protect the koala population in South Australia from becoming endangered.”

Longleat will act as a European hub for the newly-created International Koala Centre of Excellence.

The koalas will now spend around six months away from visitors to the part as they settle into their new home.

They will live alongside a pair of southern hairy nosed wombats, which are the koalas closest relatives.

The purpose built facility will be open to visitors from Spring 2019.–PA