Learning about health at the Teddy Bear Hospital

‘Stitch’ the alien teddy traversed space, but had a bumpy landing on the bedroom floor

Now in its fifth year the Teddy Bear Hospital run by the RCSI aims to help children to feel comfortable around doctors and hospitals. 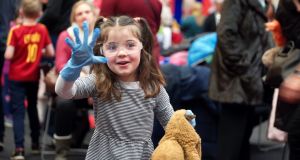 Ailidh Farrell and her teddy ‘Woofer’ at the Teddy Bear Hospital at the RCSI. Photograph: Enda O’Dowd/The Irish Times

Killian McClean’s alien teddy, Stitch, managed to travel across the galaxy unscathed but suffered “tonnes of injuries” on earth after falling from seven-year-old McClean’s bed.

Stitch was one of hundreds of teddies brought into RCSI’s Teddy Bear Hospital, where bears were stitched up, spleens operated on and tongues transplanted.

President of the RCSI Paediatrics Society, Nicole Pierce, said “the aim of the event is to alleviate childhood anxiety around doctors and healthcare” with children introduced to everything from X-rays to stethoscopes.

Ireland’s next generation of Yoga practitioners may be versed in the benefits of the ancient pursuit but still find it “annoying, very, very tiring and actually quiet hard” according to eight year-old Oisín Stack.

Oisín’s teddy, which is nameless, had numerous bruises and was getting sick regularly from nine months old. Om Sunday the unnamed bear was diagnosed with haemophilia, a condition Oisín also suffers from. Oisín remained upbeat about the diagnosis noting that “it’ll be fine as long as it (nameless teddy) doesn’t get very badly injured.”

Although the prognosis of all the bears was positive not all lessons were learned. Five year-old Freya Dennehy’s teddy, Bella, suffered a broken leg from “bouncy”.

Would Bella be bouncing again when her leg was better?

Did she learn any lessons?

The Teddy Bear Hospital ran this weekend, with all the proceeds going to Aoibheann's Pink Tie.