Do you recognise the footage?

Researchers in New Zealand were in for a surprise when they defrosted some leopard seal faeces to find a fully functioning USB key buried in the sample - mystery now surrounds the owner of the footage saved on it. Video: NIWA 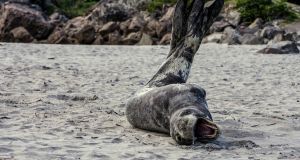 Officials in New Zealand are on the hunt for the owners of a USB stick full of photos and videos frozen in a “slab” of leopard seal poo for more than a year.

Scientists at the National Institute of Water and Atmospheric Research made the startling discovery after thawing the “scat” sample, as it is scientifically known, which was collected at Oreti Beach on New Zealand’s South Island in November 2017.

One video from the cache appears to have been filmed by someone in a blue canoe or kayak, as a mother and baby sealion swim and leap between the shore and the crystal clear shallows of the island’s southern tip.

According to a statement announcing the find, a local vet had seen a “skinny” leopard seal on the beach so collected a scat sample and sent it to NIWA marine biologist Dr Krista Hupman.

“We basically have to sift it. You put it under the cold tap, get all the gross stuff off, smoosh it around a bit and separate the bones, feathers, seaweed and other stuff,” explained NIWA volunteer Jodie Warren.

It was while undergoing this sorting process that the team found something “large and hard”. After leaving the stick to dry out for a few weeks, the team discovered the files which may help to find the owner.

As usual, some social media users were quick to come forward with jokes.

Researchers said there was a more serious side to the discovery, however.

“It is very worrying that these amazing Antarctic animals have plastic like this inside them,” said Ms Warren.

Leopard seals are the second biggest seal species in the Antarctic, after the elephant seal, known for their spotted fur.

Growing up to 11 feet (3.35m) with inch-long canine teeth, the leopard seal’s only natural predator is thought to be the killer whale.

British marine biologist Kirsty Brown was dragged under water and killed by a leopard seal while on a snorkelling mission in Antarctica in 2003.

The NIWA team are happy to return the USB stick to its owner but on one condition. They would like some more leopard seal scat.

1:47 Public transport to run at 80% and physical prison visits to end