‘Another Irish grievance!’ What happened when Irish was spoken in the House of Commons in 1901

Irish Times, 1901: ‘An angry yell of indignant astonishment arose from the Irish benches’

During a debate on decision-making powers of civil-servants at Stormont, Plaid Cymru MP Liz Saville-Roberts called on the British government to introduce legislation protecting the rights of Irish speakers. Video: Parliament Live TV 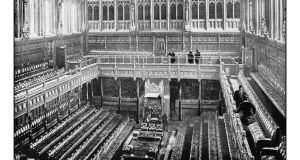 Mr O’Donnell had barely uttered a dozen words in Irish when he was stopped by Mr Gully, who insisted he speak English. Photograph: iStock/illustration

A Welsh MP spoke in Irish during an address in the House of Commons on Wednesday while calling on the British government to legislate for the protection of Irish speakers’ rights.

When a new member for West Kerry, Thomas O’Donnell, delivered – or rather, tried to deliver – a speech in Irish in 1901, the reaction was quite different. Here is how the episode was covered in The Irish Times.

“Another Irish grievance! The few members of the Irish Nationalist Party who are acquainted with the Irish language will not be allowed to use it in the House of Commons. Mr Thomas O’Donnell asserted his “right” to do so last night, but the Speaker would have none of it, being of opinion that the member for West Kerry, with the eloquence of his countrymen, would be able to address the House in very good English.

“Even the blarney of Mr [Speaker of the House, William] Gully, however, availed nothing, and ‘precedents’ were emitted from the Irish benches.

“Was it not a fact that in 1885 Mr William Abraham had actually addressed the House in Welsh?

“Yes, replied the relentless Speaker, but he only used a Welsh quotation in the course of his speech.

“Was it not a fact that the Irish chieftains, before the Union, when invited to Parliament, addressed it in the vernacular?

“That might be, but for a hundred years Irishmen had been in the House and had never sought to make themselves unintelligible.

“Was it not a fact that the Leader of the party himself had heard a member of the New Zealand Parliament speaking in the Maori language?

“Even that might be the case, but a standing order was necessary if Irish members wished to rival the Maori.

“We sympathise with Mr O’Donnell, and with the reporters of the gallery who may have seen in the “startling innovation” a welcome means of condensing Irish debates.”

‘Something was in the wind’

Further on in the same edition of the paper, a more detailed breakdown of the incident is provided. A report on page seven says that members gathered in anticipation of Mr O’Donnell’s speech, apparently aware there would could be a row in the offing: “Members came trooping in, not over-pleased at being dragged away from their various diversions, but recognising from the excitement in the Nationalist camp hat something was in the wind, they quietly took their places and awaited developments.”

According to the report, Mr O’Donnell had barely uttered a dozen words in Irish when he was stopped by Mr Gully, who insisted he speak English, as in the interaction listed above.

“It was rather a staggering ruling, but very few moments elapsed before an angry yell of indignant astonishment arose from the Irish benches, from which at once was threatened a scene of no small proportions,”reads the report.

“The first man to disengage himself from the hubbub was Mr [JOHN]Redmond, who demanded whether there was any rule of Parliament which prevented any member speaking in his native tongue. But the speaker was adamant, though he gracefully softened his ruling by the observation that with his native eloquence the hon. member would, no doubt, be able to speak equally well in English.”

Mr Redmond effectively saved the day, according to the report, by advising Mr O’Donnell to heed the Speaker’s ruling and not address the House in Irish – but also, to refuse to address it in English.

“This was, perhaps, the most dignified solution of the difficulty, of which more will be heard anon, and so the matter rested, though the disappointment of not hearing an Irish speech was by no means confined to one section of the House.”

Rarely known as proponents of cultural sensibilities or for being short on condescension, the British press of the time, predictably, had little time for Mr O’Donnell or his maiden speech. The following are excerpts taken from a round-up of the London Evening Papers published in The Irish Times on Thursday, February 21st, 1901.

Mr Thomas O’Donnell rose in the House last night to make his maiden speech, and addressed the Speaker in the Erse language. As a joke it was the feeblest performance that even Mr O’Donnell can have perpetrated, and by this time he ought to be consumed by his own blushes.

But that Mr Redmond should have shown so much eagerness to play the part of Bottom is rather sad. Mr Redmond is deteriorating rapidly. His meekness under the crushing rebuke administered to him by the myrmidons of Mr Wm O’Brien was painful enough, but last night’s performance was suicidal.

When the Speaker refused to listen to Mr O’Donnell, even after his leader had pleaded for him to be allowed to speak in the language he knew best, Mr (John) Redmond advised his follower to refuse to speak in English if he was forbidden to speak in Erse. So Mr O’Donnell shut his lips with a snap, and the House won’t hear him talk this side of Christmas. It is a small mercy, but not to be despised. As for Mr Redmond, if he would restore himself to our favour let him give similar advice to the rest of his party. - The Pall Mall Gazette

The Tongue of the Celt

It was a very pretty piece of diversion that Mr O’Donnell, from Kerry, provided for the House of Commons yesterday. His Nationalist friends had evidently had private notice of the spree for they were present in full force, whereas the mere sapen members not knowing what an attractive “turn” was in the programme had not put in an appearance. It is generally reported that Mr O’Donnell began to speak in Irish Gaelic, but we are sceptical. Who was present that could vouch for the language? We could quite easily write this comment in Gaelic if we were sure it would meet the eye of no one acquainted with the characters of that language. But we will concede to Mr O’Donnell that he provided the real article. What was his purpose in doing so, except for a bit of fun?

The Speaker had to admit that his linguistic accomplishments did not include the tongue offered by the member for Kerry. Probably not one of the Nationalists was any better equipped than Mr Gully, and we may be sure no one else in the House was. Ordinary, sober-minded, unimaginative Saxons find it difficult to see the object of addressing an assembly in a language which none but the orator himself understands. But Irishmen are fond of “hearing their own voice,” so perhaps it matters little to them whether anyone else comprehends the meaning - if any - of their rhetoric. - St James’ Gazette

If the use of Irish should come to be legalised no member would avail himself of the new privilege, because his speech would necessarily go unreported. There a re no Irish reporters in the Press Gallery, but it may be doubted whether their shorthand is capable of reproducing untranslated Hibernian eloquence. It might really be an advantage, however, if Irish Nationalist members and some few others could and would adopt the use of a dead language. The pro-boer speeches that have done so much to prolong the war in South Africa and to mislead opinion on the Continent would have been less harmful if they had been couched in Irish, Gaelic or Welsh. But then one great object of the speakers would have been foiled. - The Globe