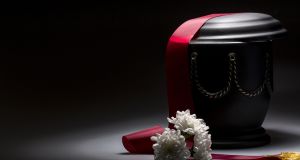 Police said the students are unlikely to be charged with a crime, even if one can be found that would apply. Photograph: iStock

A high school student mixed her cremated grandfather’s ashes into homemade sugar biscuits and shared them with several classmates, police in California said on Wednesday.

The student and a friend baked the biscuits and shared them with at least nine classmates at their school near Sacramento on October 4th, said Davis Police lieutenant Paul Doroshov.

He said the Da Vinci Charter Academy students told some of their classmates that the biscuits contained human ashes.

He said investigators interviewed nine students who ate the biscuits, and said there were other supporting details that he declined to disclose that make the allegations credible.

Mr Doroshov said the students are unlikely to be charged with a crime, even if one can be found that would apply.

A classmate who said that he unknowingly took a bite of one of the biscuits said he believes they contained human ashes.

“She had mentioned her grandpa’s ashes before,” classmate Andy Knox said.

Knox said the girl, who was not identified by authorities, previously offered him some ashes if he swapped desks with another student in their class.

“I didn’t believe her until she pulled out the urn,” Knox said. “She told me there’s a special ingredient in the cookie.”

He said he became worried after tasting the biscuit. “I thought that she put drugs in it or something,” he said.

Knox said the girl laughed and said the cookie contained her grandfather’s ashes. “And I was really, I was kind of horrified,” he said. He took only one bite.

“If you ever ate sand as a kid, you know, you can kind of feel it crunching in between your teeth,” he said. “So, there was a little tiny bit of that.”

Investigators said other students knew of the ashes before eating some of the biscuits.

Mr Doroshov said he and investigators were at a loss to identify a motive. “They’re juveniles and it’s not a heinous or serious crime,” he said. There was no public health risk either, he said.

“I really don’t think it fits into any crime section,” Doroshov said. He said investigators looked at an obscure law making it illegal to mishandle human remains, but said “this isn’t what that law was intended to stop”.

He said police will let the school handle the matter.

Headteacher Tyler Millsap said in a statement posted on Facebook and emailed to parents that the incident “has been particularly challenging and we have responded appropriately and in the most respectful and dignified way possible”.

He said those who were involved “are remorseful and this is now a personal family matter”. – AP