A number of people have been hospitalised after being stung by Lion's Mane jellyfish in Ireland during the hot spell. Research from NUI Galway and University of Hawaii suggests an effective treatment for the sting. Video:NUIG / Damien Haberlin 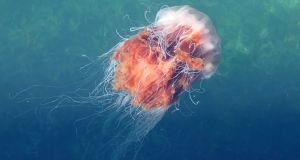 Sea swimmers may know that Lion’s mane jellyfish are the most venomous of the indigenous species in Irish waters, but they may not know that this season’s generation is far larger than usual.

The typical jellyfish lives in the water column for six to eight months, having been released as a juvenile in December

“It is not correct to say this is the first time they have been spotted on the west coast, as we had reports for the last two years, but they are particularly large and mature,” he noted.

“They normally prefer the Irish Sea as it is cooler, and the hotspots are the Forty Foot in south Dublin, and popular swimming places like Bettystown, Co Meath and Clogherhead, Co Louth, and right around to Donegal, ” he explained.

Several swimmers in the west have reportedly received hospital treatment for Lion’s mane stings, which can cause severe pain and lead to what Dr Doyle and colleagues call “dangerous systemic effects” including “Irukandji-like” syndrome. This syndrome, named after a type of box jellyfish, can involve symptoms ranging from severe headache and backache to abdominal pain, nausea, vomiting, and even cardiac arrest.

“The typical jellyfish lives in the water column for six to eight months, having been released as a juvenile in December, but we believe these jellyfish may have over-wintered and may be on their second season,” he said.

Dr Doyle is urging sea swimmers and coastal visitors to report any sightings with photographs if possible to the National Biodiversity Data Centre website and the Big Jellyfish Hunt Facebook page.

Dr Doyle is co-author of a recent paper on jellyfish stings which recommends vinegar and 45-minute immersion in hot water as the best treatment, rather than rinsing in seawater which may make a sting worse.

He is currently researching trends in jellyfish abundance as part of the EU CERES project to examine how climate change will influence Europe’s most important fish and shellfish resources.