Did you hear the one about the rich widow, Mrs Duzenberry?

Cream of Jokes: What did Weekly Irish Times readers think was funny in 1893? 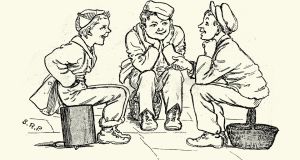 Cream of Jokes – where the jokes are old and often terrible.

Cream of Jokes was a competition that ran in The Weekly Irish Times in the late nineteenth century. Jokesters were invited to contribute their best gags to be were voted on by readers.

Each week, those competing for the five shillings in prize money had to guess the three most popular jokes and the order of merit.

One winner correctly guessed the order of merit for the below jokes; Mr McKee, of the Royal Irish Constabulary, from Castlecomer. Scroll to the bottom to see which were the top three jokes.

2. “Now, Johnny,” said Johnny’s father, “I want you to go back to Mr Parker, and tell him you didn’t mean to ring his doorbell and run away.”

“But you must. It was very naughty of you to do it.”

“I know that; but I did mean to do it, and I don’t think I ought to tell Mr Parker a story.”

“Why, I heard that she was engaged, so I went around and proposed to her, so that she wouldn’t think I had been trifling with her.”

“And was she engaged?”

“Yes, but she broke it off. She said my love was more sincere than his.”

4. Clara: “And have you really decided to have him?”

Clara: “Then why is the poor fellow going around with such a gloomy face?”

5. “What do you women talk about at your Dorcas meeting, anyhow?” asked Scadds.

“About all the time, I fancy,” put in Skidds.

And then Mrs Scadds refused to say a word.

6. “I saw Miss Flyaway, of the Casino, on the avenue today. She appeared to be anything but beautiful.”

“Ah, my boy, have you yet to learn that stars shine only by night?”

7. Editor Dinkeyvilly Clarion (musing): “Good idea of mine, sending Scriber, the foreman, over to comfort the Widow Duzenberry and to get particulars for an obituary notice of her departed husband. There is nothing like taking time by the forelock. She is wealthy, and this attention of mine ought to make me pretty solid with her. I - hello, Scriber (as the foreman enters), what detained you so long?”

Scriber (cheerfully): “Oh, it took some little time for Mrs Duzenberry and me to go over to Rev Mr Harps and get married.”

8. Elderly Relative (to schoolgirl): “Amanda, you are looking pale. You must not be too ambitious. Tell me the truth now - haven’t you been burning the midnight oil?”

Miss Amanda (her paleness all gone): “Why, yes auntie, but - but not much. We turned the lamp down very low.”

9. Mrs Chinner: “I wonder why lightning never strikes twice in the same place.”

Chinner: “When the lightning comes round the second time the place isn’t there.”

10. “What do you think of that artists who painted cobwebs on his ceiling so truthfully that the hired girl wore herself into an attack of nervous prostration in trying to sweep them down?”

“There may have been such an artist, but never such a hired girl.”

11. Willie: “That was an awfully funny story you told pa the other night in the library. I stood outside the door an’ almost split myself laughing.”

The Colonel: “You young rascal! You had no right to listen. You didn’t repeat that story, did you?”

Willie: “You’ll just find out when you see mother.”