Did you hear the one about the man who flirts with the servants?

Cream of Jokes: A weekly contest for 19th century readers of The Irish Times 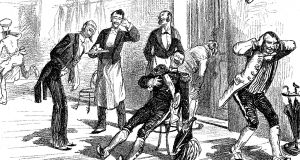 Another week, another handful of very old jokes.

Cream of Jokes was a competition that ran in The Weekly Irish Times in the late nineteenth century. Jokesters were invited to contribute their best gags – rarely hilarious, often confusing and nearly always dark – each week.

Jokes were voted for by readers (by post card) and competitors had to guess the three most popular jokes and their order of merit. The winner took home five shillings in prize money.

Two people correctly guessed the correct order for the below jokes, published June 11th, 1892; a draw declared Mrs Cormack of 4 St Patrick’s Tce, Russell Street, Dublin, the winner. Scroll to the bottom to see which were the most popular.

1. Little Miss (breathlessly): “Oh, sir, papa hit his fingernail with a hammer, and I’m ‘fraid he’s going to have an apoplectic fit.”

Minister: “Dear me! He’s one of my latest converts. What can I do?”

Little Miss: “He wants you to give him permission to swear.”

2. “I had to be away from school yesterday,” said Tommy.

“You must bring an excuse,” said the teacher.

“He ain’t no good at making excuses; ma catches him every time.”

Tumper: “Are you his wife?”

Editor’s Wife: “I am; is the business anything I can attend to?”

Tumper (sizing her up): “I shouldn’t wonder; I was going to thrash him.”

4. “Arthur,” said a good-natured father to his young hopeful, “I did not know until to-day that you had been whipped at school last week.”

6. Fair Passenger: “What makes the ocean so savage, I wonder?”

Captain: “Because it has been crossed so often, I presume.”

7. Teacher: “Who was it said property is robbery?”

Boy: “I don’t know. I suppose it was some fellow who hadn’t any.”

“Very; I understand he flirts with the servants!”

9. “My son called me an old crank the other day, and my wife wouldn’t let me punish him.”

“She said a child should never be punished for telling the truth.”

10. “But if you have broken the engagement, why don’t you send his picture back to him?”

“Because I’m afraid he’ll give it to some other girl.”