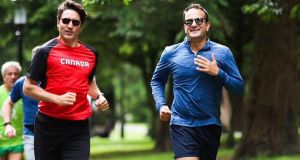 The Taoiseach has ditched his well-known Twitter handle in favour of the more prosaic @LeoVaradkar, he announced on the social network on Friday.

Fine Gael insisted that no money had changed hands arising from the social media changeover. It is understood that handles relating, or potentially relating, to world leaders and celebrities are reserved by Twitter and can be released when they are claimed by such individuals.

“We didn’t pay anything, we didn’t take anyone’s handle,” a Fine Gael spokesman said. The update of Mr Varadkar’s social media persona was to “heighten awareness of his Instagram,” the spokesman added.

I have changed my social handles to @LeoVaradkar. You don’t need to refollow me - it happens automatically.

The Taoiseach reassured his 198,000 followers that “you don’t need to refollow me - it happens automatically”. He also promised “unique content” from Fine Gael’s national conference in Wexford, where he will deliver a keynote speech on Saturday evening.

The biggest spender by far was the Department of An Taoiseach, which spent more than €437,000 last year on 18 different campaigns.

Mr Varadkar’s so-called “spin unit” - the Strategic Communications Unit - was disbanded last year after a controversy over the placement of advertorial in national and local newspapers.

The seamless - and cashless - transition means that the Department of An Taoiseach has avoided a second tangle with cybersquatters. In the early 2000s, a request was famously made to then taoiseach Bertie Ahern for a payment in return for the rights to bertieahern.com, which a cybersquatter had acquired and used to host a pornography site.

The same cybersquatter controlled domain names including thetaoiseach.com and bertieahernsucks.com.