A murderous cab driver and the first hanging at Mountjoy Prison

Sean Reynolds, curator of Mountjoy Prison Museum shows us some of its very unusual exhibits and brings us into the prison's execution chamber, known as the 'hang house' which was last used in 1954. Video: Bryan O'Brien 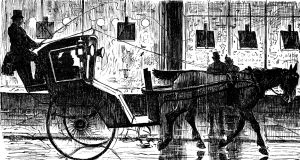 Lost Leads, 1900: John had not been out working in his cab for some time. Illustration: iStock

Thomas Neary was awakened by a noise as he lay in bed in the front drawing room of a house on Dublin’s Charlemont Street. It was loud, and merited investigation.

By his own account, on jumping out of bed he heard raised voices from the back room. He approached the room, which he had rented about two weeks previously to a couple – John and Lizzie Toole. The door was ajar. A light was on.

“I went back and dressed myself and went downstairs to the back yard,” Neary later recalled. “I could find nothing to account for the noise.”

Passing the Tooles’ room on the way back to his own, Neary found that the previously-cracked door was shut tight. He returned to bed – that was the evening of December 1st, 1900. The sleep didn’t last the night.

“About 5 o’clock am I was awoke by a noise like a terrible fall as it seemed from the next room – I heard no other sound but a slight cough immediately after,” said Neary. “As far as I could judge it was Mrs Toole’s cough.”

The couple had taken the room at number 45 on November 17th. John was a 63-year-old cabby, while reports describe Lizzie as being younger, at about 30.

Their short stay had been punctuated by fighting. Just that previous Tuesday, Neary heard Lizzie tell John that if he didn’t care to go out and drive his cab, he could get someone else to go. John had not been working his usual beat for a couple of weeks.

The second noise to wake Neary was enough to cause concern, but not to spark action. Twelve hours of lifelessness from the back drawing room would pass before he alerted the police.

When constable James Cassidy arrived, he found the room locked, with the doorknob missing. He broke open the door and asked for a light.

There was blood on the floor, where the couple lay. Blood was spattered on the walls, too. “The first thing I observed when I got the light was two figures lying on the floor - on the straw,” said the policeman. “They had an old rug and coat over them.

“The woman’s body was cold and stiff. It was face downwards,” he said. “There was a quantity of blood about. Her throat was cut.”

John, however, was warm. And breathing. His throat was cut, though superficially compared to Lizzie’s. He eventually stirred: “After a minute or two, (he) asked for a drink,” said the policeman. “I found him a drink. He partly raised himself. He had got on to his side.”

John made no reply when the constable asked how he and his wife came to be in the state they were in, instead asking the constable to reach into his pocket, where he would find money to pay two men debts he owed. The policeman also found the doorknob, along with the key to the door.

I spoke to her and she did not speak to me. I then turned her up and saw she was dead

It was a police inspector named Feely who discovered a closed razor – covered in blood and with a saw-like, jagged blade – at the edge of the straw. He arrested John and cautioned him, to which the cabby replied: “I didn’t do no murder.”

It would be later, in the Meath Hospital, before he tried to explain the scene.

Toole’s account of what happened was reported in The Irish Times and survives in the case files. The day before the grim discovery, he said, the couple took a walk and stopped in a Ranelagh pub for a few drinks. They rowed about the landlady before going to sleep.

“About 3am on same morning I got up to the bucket,” said Toole from his hospital bed. “I spoke to her and she did not speak to me. I then turned her up and saw she was dead. I opened the door and went out on the landing. I could see no person, they were all asleep and I did not like to waken them. I then came back and went to bed when I saw I could do no better for her. I remained so until 3pm on Sunday when I saw her dead, and that there was nothing for me only to do away with myself.”

Toole, a widower prior to his relationship with Lizzie, tried to put distance between himself and the dead woman – herself a widow.

“She was not my wife,” he said. “She was constantly following me through the streets and making a show of me. I could not get rid of her anyway. I then tried to do away with myself by trying to cut my throat as best I could. I done my best and scarred the soles of my feet, thinking I would bleed to death. I remember nothing else till I was found in hospital.”

She was all covered with bloodand her bodice was all torn

The following hearings at the Green Street courthouse in Dublin revealed chilling details about John’s abusive relationship with Lizzie – whose other reported surnames were McGuinness, her maiden name, and Brennan, that of her first husband, who died nine years before her death.

An Irish Times report on January 19th details a previous attack – one she survived. The story was told by a former neighbour of Toole’s, Thomas Driver, who heard the deceased scream “murder” and tell her attacker, John, to “put the razor down”.

“She was all covered with blood,” said the witness, “and her bodice was all torn.”

Bridget Purcell, a sister of the victim, said Toole had come by her house on North Anne Street looking for Lizzie. “He said, sometime he would give her a knock and she would never tell who had done the deed,” Bridget recalled. Before seeing Lizzie’s body in the morgue, Bridget had not seen her sister for five months. She had “lost trace” of her.

Another of Lizzie’s sisters gave evidence indicating a pattern of violence, saying she once saw her “black and blue – without a white spot on her. Her eyes were closed up. Her face was all purple. Her eyes were black and yellow”.

Doctors painted a cold-blooded picture of the attack. Lizzie’s throat wound was deep, and had severed her gullet and larynx.

“The wound went right to the back of the throat,” a doctor named Oulton told the court. “I believe it was done while she was asleep and that she was lying on her back or nearly so, at the time. She may have turned herself over in her last effort, on her face – or some one may have done so.”

Toole’s defence counsel questioned witnesses’ testimony, and said that if anything, the crown’s evidence showed a flare of temper, and that manslaughter, rather than murder, could be the only verdict – should the jury believe the prosecution.

Irish Times reporters considered the crown’s case unanswerable. The jury felt the same, finding Toole guilty of murder but recommending him to mercy, as was common.

Justice Kenny asked Toole why he should be spared from the executioner, and noted the prisoner’s response in his summary: “. . . without any trace of emotion or excitement whatever, (Toole) referred to the evidence of some of the witnesses as being fabricated – especially that of constable Hennessy, who had taken down his statement in hospital”.

It was a last-ditch attempt that didn’t wash. Toole was sentenced to death and removed from the courtroom.

Reporters weren’t allowed into Mountjoy Prison for its first ever hanging on the morning of March 7th, 1901. Instead, they waited alongside the public for the customary hoisting of the black flag high above the walls of the prison. The signal came shortly after 8am.

“So far as can be learned he made no confession, but during the period of his incarceration, and in the closing especially, he attended with much earnestness to the ministration of the prison chaplains, and on several occasions he was visited by nuns,” reported The Irish Times.

Two handwritten words in Toole’s file sum up the performance that morning of English executioner Thomas Henry Scott. “Quite satisfactory.”