Cats reacted by pricking up their ears or moving heads 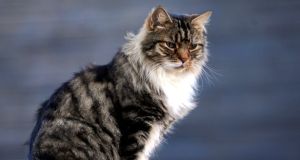 Cats are able to recognise their own names. File photograph: Nick Ansell/PA

Cats are able to recognise their own names much like their canine counterparts, a study has suggested.

Much is known about the ability of dogs to communicate with humans, but researchers in Japan decided to investigate how well domestic cats could discriminate between different human words.

The experiment involved measuring whether the cats reacted to their names when they were spoken among a string of other random nouns.

The same test was then carried out with the words being spoken by a stranger, rather than by the cats’ owners.

Scientists discovered that the pets showed responses that would indicate recognition, such as pricking up their ears or moving their heads, although rarely showed any more excitement, such as moving their tails or making noise.

The experts said it was “reasonable” to believe cats would react to their own names as they might associate it with rewards, such as food or play, or with “punishments”, such as having a bath or going to the vets.

But whether cats care is another matter.

John Bradshaw, an expert on human-animal interactions from the University of Bristol, told The Times newspaper in London: “Cats are just as good as dogs at learning — they’re just not as keen to show their owners what they’ve learnt.”

Atsuko Saito, from Sophia University in Tokyo and the author of the report — which was published in the journal Scientific Reports, said the study could be used to help improve cats’ quality of life in the future.

“For example, perhaps we can get cats to learn that dangerous objects or places are referred to by specific utterances,” he wrote.

“This work has shed new light on the ability of cats to communicate with humans; further clarifying cats’ abilities with respect to cat-human communication will potentially enhance the welfare of both humans and cats.” - PA