Very old jokes: Did you hear the one about Willie Winker’s new pony?

Cream of Jokes: A weekly contest for 19th century readers of The Irish Times 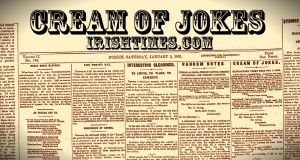 Cream of Jokes was a competition that ran in The Weekly Irish Times in the late nineteenth century. Jokesters were invited to contribute their best gags – rarely hilarious, often confusing and nearly always dark – each week.

When the competition began, it was a straight race – the best joke was awarded the five-shilling prize money. By the time the below crop were published, the game had changed; jokes were voted for by post card and competitors had to guess the three most popular jokes and their order of merit.

Here were the sixteen jokes up for votes that week. At the bottom, you’ll find the top three voted-for jokes, as correctly predicted by the week’s winner, Mr Robert Pringle of The Dispensary, Dungannon.

She: “No; but there is no telling when you are going to press.”

2. “What is the difference between a pneumatic and a powder machine?”

3. Magistrate: “What, you here again, Slattery? This must be the twentieth time you’ve been up before me.”

Slattery: “Well, yer worship, tis no fault of mine that ye don’t get promotion.”

Mrs Girgle: “Something tells me I may die before I wake!”

5. “Old Goldbug is to marry the beautiful daughter of Harduppe, I believe!”

“Does her father give her away?”

6. He: “Your husband tells me he enjoyed himself in Paris more than anywhere else on his wedding tour. Did you?”

Mr Dolley (surveying it critically): “There’s something in it I like.”

8. Blinkers: “Why is it your friend Wilkers is always down at the heel? Does he lose his money on horse?”

Dinkers: “He never bets on a horse race. He loses his money on the human race.”

“He has nine children.”

“Yes, and it’s the bee-utafulist pony I ever saw.”

“Just as gentle as can be. I rode on it, an’ didn’t fall off once. A boy couldn’t get hurt on that pony.”

“It eats hardly anything, too, and doesn’t cost much to keep.”

“Not anything, hardly. Willie said his papa bought it real cheap.”

“And he said there was plenty more where that came from.”

“No. I was only thinkin’ what a nice pony Willie Winkers has.”

10. Mama: “Why don’t you play with little Algernon Maythorne?”

“Does he play with dolls?”

“Worse. He plays with girls.”

11. She: “Would that mortals were endowed with power to thrust aside the veil which shrouds the future and look forward adown the corridors of time with the ease with which we gaze upon the past in retrospection. How gorjous.”

He: “Yep! But, in the meantime, I’d like it mighty well if we’d be endowed with the power to scratch the spot on our backs which always itches about a sixteen of an inch beyond our uttermost reach.”

12. “I suppose you haven’t forgotten that it is leap year,” he said, as he took a seat beside her, “and so I must be careful not to lead the conversation in a dangerous direction,” and he laughed.

“I had quite forgotten it,” she said, with a yawn; “what’s the use of remembering it when you never meet a man who is worth proposing to?”

This time he didn’t laugh.

13. “Mother (in her daughter’s boudoir): “I like that young man exceedingly. While he was in the parlour waiting for you I happened to go in and surprised him reading the Bible. The silly boy looked dreadfully confused, just as if true piety was something to be ashamed of. I set his mind at rest on that point, and he seemed quite relieved.”

The Young Man (at the club): “That girl is thirty years old. I saw it in their family Bible.”

14. Visitor (in a newspaper office): “Who is the little man at yonder desk.”

Attendant: “That is the religious editor.”

“Does he do nothing but write religious matter.”

“Oh, yes; he writes the tips for races every day.”