‘Noble outline of a manly chin’: A history of shaving in ‘Irish Times’ ads

Beard advantages, 1950s: ‘It provides, as it were, a built-in outlet for nervous tension’ 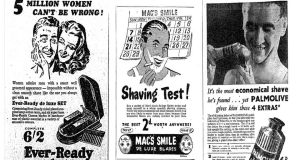 Ads for razors, gift sets and shaving creams have been published in ‘The Irish Times’ since the very first issues

Movember is over for another year. The Big Shave has begun. Men’s health is an excellent reason to grow facial hair – but, of course, there are others.

One advantage is the provision of a built-in gadget – an essential accessory for the modern man, according to an Irish Times article published in March, 1954.

“In an age when men are often ill-at-ease without some toy with which to fiddle, it provides, as it were, a built-in outlet for nervous tension. The man with a beard to tug has no need for a pipe to pull or a cigarette to tap,” reads the piece.

“He may encounter some trifling difficulty in negotiating certain foodstuffs; but, against that, he can make minor economies on neckties, to say nothing of the major economies in razor blades, shaving soap, hot water and discomfort.”

JUMP TO: Shaving ads from past editions

Growing facial hair (that looks well) can be hard work. Many would have discovered that during their own attempts to grow moustaches last month. Particularly tricky are the middle-stages.

“Taken by and large, the scale would be heavily loaded in favour of the beard if it were not for the awkward and embarrassing period of apprenticeship; for beards, like cities, are not built in a day.”

Nevertheless, the author apparently likes beards. Very much so.

“Without question, there is something splendid and impressive about a beard full-blown,” the piece suggests. “ At best, a luxuriant growth of hairs upon the chin and upper lip adds dignity and virility to an already dignified and virile countenance; at worst, it disguises the weaknesses and covers the irregularities of anybody who is lacking in such heroic qualities.”

The shaving of beards – “the daily ordeal by soap and steel” – also pops up from time to time in the archive of The Irish Times.

Shaving made the news pages on occasion, such as in 1953 when, facing the decline in people attending salons for their regular shave, barbers issued an urgent appeal: “Bring back the shaves.”

Most mentions of shaving, however, appear in ads for razors, sharpeners, creams and foams, mostly geared towards men. Many others were pitched at women as gift ideas.

With many formerly-mustachioed men looking at bare faces in the mirror today, it wouldn’t be kind to profess how great facial hair is. With that in mind, here is a brief history of shaving, as told in adverts in The Irish Times through the years.