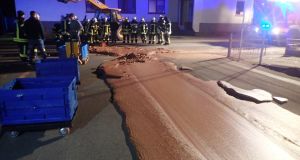 Spilt chocolate is seen on a road in Werl, Germany December 10, 2018 in this picture obtained from social media. Photograph: Reuters

Firefighters in the town of Werl in western Germany tackled an unusual emergency late on Monday when a tank at a local firm making liquid chocolate overflowed and poured out onto a street and solidified quickly after coming into contact with the cold road.

“About a tonne of chocolate ran out into the yard and from there onto the street,” a spokesman for the Werl fire department said in a statement.

About 25 firefighters worked to pry about 10 square metres off with shovels.

They also used hot water and torches to remove remaining bits from cracks and holes.

Company boss Markus Luckey told the Anzeiger the factory would be back in action on Wednesday. Luckey said if the spill had happened closer to Christmas, “that would have been a catastrophe”. Reuters / AP