‘The marauders took to their heels’: Policing rent rows in the 19th century

Lost Leads: An Irish policeman recounts a bloody story from Co Laois in 1847 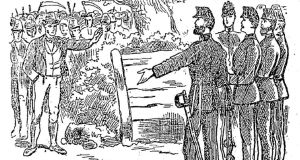 “The leader of the mob demanded a parley”. Illustration: The Irish Times

In late 1886, a series written by a Royal Irish Constabulary officer ran for a number of weeks in The Weekly Irish Times. Throughout the articles, the anonymous writer recounted stories of murder and intimidation, told by members of the police force which operated in Ireland from the early nineteenth century until 1922.

By writing the series, the constable hoped “in the first place, the stories may prove both amusing and instructive to the younger members of the Royal Irish Constabulary who, in reading of the good work done by individuals of their own profession in former and later times, may find a stimulus to their personal energy and zeal in the performance of their important duties.

“In the second place, the compiler, while only too sensible of many shortcomings in the style and manner of the narrative, yet trusts that the stories, being in all cases actual occurrences, related in general by eyewitnesses, may possess some interest for the public at large, and enable outsiders to form an idea of the peculiarities of Irish police duty, and of the men by whom it is performed.”

In the year 1847, the centre and the west of Ireland was disturbed by a rent agitation, which then as now excited the poorer tenantry to many lawless acts. A combination, far less extensive in its operations, and guided by leaders far inferior in intellect to those who originated and controlled the Land League of later days, had set itself to defeat the processes of law which the landlords invoked to enforce their demands.

The days of Captain Boycott had not yet come; and the many subtle weapons of the system which has rendered his name historical were yet undreamed of. The landlord’s chief remedy was to distrain for his rent [seize the tenants’ property pending payment] by the most rapid legal process open to him. The tenants’ defence consisted in assembling in large bodies by night with carts and horses, and sweeping away from the threatened farm to a place of security every head of stock, crops and moveables on which a bailiff could make a seizure.

These organised gangs of determined men caused much alarm: and, as they frequently went armed and carried out their object in open defiance of the law, the police had orders to intercept and disperse all such assemblies whenever they came across them. The borders of the King’s and Queen’s Counties [Offaly and Laois] were in a state of great disturbance, and the constabulary in the locality were specially on the alert to detect and prevent those unlawful assemblies.

At a roadside station in the Queen’s County, close to the bounds of the King’s County, Constable Hall was posted with a small party of men. One night he was wakened from his sleep by the sound of a number of wheels passing by the barrack door. He looked out of a window and saw a string of carts with a crowds of people go by. He at once concluded that they were proceeding to carry off the property from an adjoining farm which was under distraint for rent. Turning out his party, he despatched a messenger to an adjoining station for assistance, and in a short time he was reinforced by four extra men.

He had now in all a force of ten sub constables available for duty and with this little army he awaited the return of the carts. Presently the sound of wheels was heard, and Constable Hall drew his men across the road. The cavalcade approached until the constable called out to them to halt. A voice in reply cried out - “Ridemen to the front!” and, without further parley, a volley was fired, by which some of the police were wounded. One man, who was standing beside the constable, was shot through the heart, and, dropping his carbine, he spun around two or three times and dropped dead on the road.

The police returned the fire. As Constable Hall was presenting his carbine, a bullet struck the barrel, and, glancing along, carried off the top joints of the first two fingers of his left hand. Several of the mob protecting the carts were wounded, and eventually, after a sharp interchange of volleys, the marauders took to their heels, leaving to Constable Hall and his intrepid little party all the spoils of war.

Almost at the very hour that the scene detailed in the last anecdote was being enacted, a very similar occurrence took place in the Queen’s County, not twenty miles away, happily however, without such a sanguinary result. In this case, the sub-inspector at Ferbane had received information that a raid was to be made upon a farm in his neighbourhood. Assembling all his available men; some twenty in number, he marched off to intercept the rioters.

He was just in time to meet an enormous mob, armed with guns, scythes, reaping hooks, and pitchforks, escorting along the road a string of carts laden with farm produce. He called a halt, but in this instance the leader of the mob demanded a parley. He was evidently a genius with some knowledge of the law, and was unwilling to risk a combat until he had tried other means. He demanded by what authority he and his companions were stopped on the Queen’s highway. The sub-inspector, a cautious man, and, thoroughly determined to defend himself if attacked, was yet doubtful how far the law would justify him if he was the first to use force. He therefore temporised by demanding to know on what business such a number of people were out at night.

He was informed this was no concern of his, and the mob clamoured to be allowed to pass on. The sub-inspector refused to permit this and things looked threatening, when the officer, seeing that a bloody encounter was imminent, suggested a compromise. A very popular gentleman named Lawder, who was a justice of the peace, resided close by. The officer proposed that this gentleman should be sent for and his advice taken, both parties agreeing to abide by his decision. After some demur this was agreed to , and a policeman was despatched to summon Mr Lawder. The opposing parties quickly kept their places awaiting his advent.